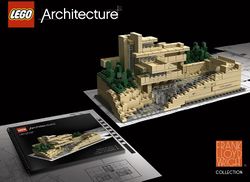 21005 Fallingwater is a microscale model of the Fallingwater house in Pennsylvania designed by Frank Lloyd Wright.

Microscale (also called Miniscale) is a LEGO building style in which models are constructed smaller than in standard minifigure scale (which is roughly 1:48). This allows the construction of relatively small and space-preserving models of huge structures that would usually be very large when built in a minifigure-compatible size.

Many early LEGO sets that were released before the introduction of minifigures can be considered microscale models but the term usually refers to newer products as well as MOCs. Official LEGO microscale models can be found in the Star Wars Mini line or the theme Architecture.

The term microscale seems to imply a small size but this doesn't have to be the case. The sets 10030 Imperial Star Destroyer and 10143 Death Star II are technically microscale models despite their large size, since they are well below minifigure scale.