This article is about the villain from Alpha Team. For the asteroid in LEGO Island 2, see Ogel Island.

Ogel is the Alpha Team's main enemy, and appears in every one of the theme's subthemes. He has appeared in a total of five sets, and has had three different variations.

Ogel has unprinted black legs and an unprinted black torso. He wears black mechanical shoulder pads that were originally seen in the UFO theme. His face is yellow and has a scowling expression. He has one red eye and wears a black helmet with a large golden visor.
His variation form the second two years of Alpha Team both replace one of his hands with a hook. In Mission Deep Sea it is transparent red, and in Mission Deep Freeze it is transparent light blue.

Ogel is the main villain of the Alpha Team, and is constantly coming up with various schemes to defeat them.
His first plot was to use his Mind Control Orbs to turn regular minifigures into mindless skeleton-like Drones, and to use them as an army. This plan was foiled when the Drones were reverted to normal by the destruction of the Orbs. In this confrontation, Ogel lost his left hand.
He returned the following year with a new plan to use a new type of Orb to create an army of mutated sea creatures, and use them to control the world's oceans. That plan was thwarted when Dash Justice reversed the controls to the Orb making machine, destroying his new underwater base. although the base was destroyed, Ogel escaped before it exploded.
His third and final plan for world domination was to freeze time with new Ice Orbs, which were capable of freezing anything. His plan succeeded, but then Zed arrived to battle Ogel in his Scorpion Orb Launcher. At the end of the comic, the LEGO Magazine had a contest for fans to write their ending to the battle. The winning entry was never revealed, but it is assumed that Zed defeated Ogel.

In each year that Alpha Team received a major release, a set was included representing a new fortress for Ogel. All the fortresses have certain similarities, such a skull motif, frequently grey colouring, and the inclusion of only two skeleton drones each.
In Alpha Team's first year, the set as 6776 Ogel Control Center. It consisted of a relatively small fortress, built on a large baseplate. A large portion of the control centre was taken up by a large rocket. The building was styled in red, black, and grey, and included two first generation skeleton drones. 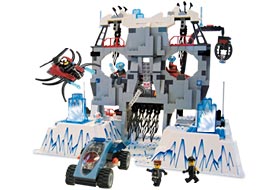 Ogel's second fortress was released in the Mission Deep Sea subtheme, in the set 4795 Ogel Underwater Base and AT Sub. The base was a large oval affair, mainly coloured black and grey. It included two second generation skeleton drones to man it, as well as a killer octopus.
Ogel's third and final fortress, released in 2004, was 4748 Ogel's Mountain Fortress. It was built on a large raised baseplate, and mainly consisted of a huge skull-like construction. The base as a whole was mainly coloured light grey and white, and featured two third generation skeleton drones, as well as a personal flying vehicle for Ogel.

As minions, Ogel uses various Skeleton Drones, which were once normal minifigures, but were corrupted by the power of his Mind Control Orbs. Each year, Ogel's minions have been slightly different, with tweaked uniforms and equipment.