Part 73200 is the standard minifigure legs part. It actually consists of three pieces, the hip and the legs. Sometimes, the legs and/or the hip is/are printed which results in a different part ID.

A minifigure Leg is a rounded part rectangle which serves as a LEGO minifigure's leg. The foot is as big as a 1x1 plate. The area above the leg is thinner and becomes round at the top.

There is a different piece for the right and left legs, which are connected to the hip through thin axles. They are also available in different colours and with different designs. 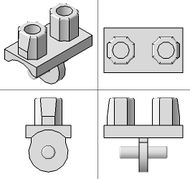 Different views of the hips

The hip is a LEGO part that is in the middle area of a minifigure and plays a key part in holding the minifigure together. It connects with the legs to create the "bottom part" and the Torso to create the "top part".

In most sets, printing is fairly rare on the hip. However, it is becoming more common for belt printing and continuations of leg or torso printing to be located there. An example of this is Pre Vizsla. 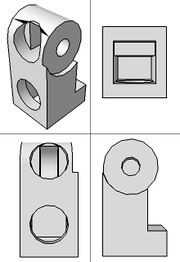 Different views of a leg

Short legs have also been made on small minifigures such as Frodo Baggins and other Hobbits, Yoda, Dobby, and Ewoks. These legs cannot be bent and are about half as tall as normal legs. They are commonly used as children's legs.

Not all minifigures use these legs. Others such as Hagrid have larger, non-movable legs.

Two types of artifical legs are also made. They are symmetrical and can be either right or left legs. The first is the pirate leg, used for pirates like Captain Brickbeard. The second is a more modern style, used on Dr. Rodney Rathebone.

Leg printing first appeared on Islanders and Spyrius minifigures in 1994. Leg printing used to be very rare but is quite common now. Many legs from the Star Wars theme have unique printed styles. It is also common to find printed legs in Kingdoms sets and Minifigures.