Spyrius was a subtheme of LEGO Space in the years 1994-1996. It featured a group of spies that frequently stole technology from other factions with their robots.

Spyrius sets were predominately red and black, often with transparent blue cockpits and windows. Their base was found on one of the outer planets of the galaxies, also called Spyrius. After stealing things from other factions, they would bring their catches back to their planet, and guard it with their giant robots.[1]

Spyrius was the first theme to feature a robot minifigure, the Spyrius Droid. In the UK, it appears this robot was the commander of the faction and was named Major Kartofski. In Germany[2] (including in a Time Cruisers audio drama),[3] the Spyrians were referred to as "mutants" and "pseudonauts". 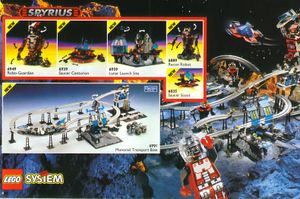 A catalog page with with several Spyrius sets. 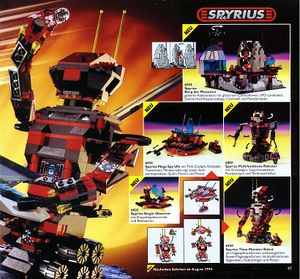 Another catalog page with with several more Spyrius sets

Popular Spyrius vehicles include 6835 Saucer Scout and their largest starcraft, the 6939 Saucer Centurion (both 1994) (which, like the Unitron's Star Hawk II, is smaller than the larger starships of other space agencies). The base was 6959 Lunar Launch Site (1994). The theme also included two robot vehicles, 6889 Recon Robot and 6949 Robo-Guardian (both released in 1994).