5988 Pharaoh's Forbidden Ruins, aka 5988 Temple of Anubis, is a Adventurers Egypt set, released in 1998. With 710 pieces this is the largest Egypt set. It contains a large Egyptian Temple, a truck, a balloon and ten minifigures. It was also released as part of 9377 Adventurers Combined Set.

The Pharaoh's Forbidden Ruins is made up of four separate entities. These are two baseplates, a balloon, and a truck. Lord Sinister's truck has six wheels. The front has a license plate. The cabin of the truck, where the minifigures sit has a pressure gauge in the middle of it. Below that part of the truck are two curved parts. The top of the truck is open, and the roof can be raised or lowered. It has a small windscreen on the front. The truck has a chain in front and in the back there are two side fences to ensure the carried load does not fall off. There are two boxes to carry, each containing tools. 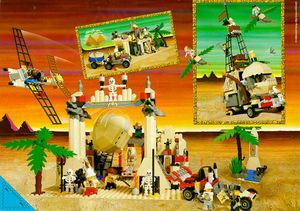 Some alternate models in the back of the instructions

The balloon is very similar to the balloon in a different set. It is built around an octagonal base, with red diagonal parts forming walls in it. The balloon has a four sandbags, one on each side. It carries a pickaxe in one corner. The top of the balloon is a simple shape. It attaches to a few parts which connect it to the bottom. It is also attached to a burner which is what lifts the balloon into the air. The helium burner has a switch to turn it on an off. On top of the balloon there is also a net.

The front of the building is the tallest and largest structure in the set. Through the middle of it there is a passageway into the temple. There are two skeletons on either side and a falling axe trap. On one side of the front (inside the walls) there is a sarcophagus with a mummy and sceptre inside. The walls in the centre are not completely sealed, so the skeletons can be moved to reveal entrances into the sides of the structure. In front of the walls, there is a small fire. To the right and left of the passageway there are two large parts with hieroglyphs on them. Over the top of the entrance there are parts with the appearance of teeth and it's made to look as if above it is a nose. Above the "nose" there are a pair of transparent red bricks representing eyes. More large parts are included, with hieroglyphs on them to either side. There is a second floor with two trapdoors. Each trapdoor will fall open if a piece is pulled out. One of them is attached to the chain, which is attached to the axe trap. On the back of the structure there is a double-height ladder leading up to the second floor. It leads up to the part of the second floor with two trapdoors between it and a black treasure chest with a bat on it. Hiding the second floor from view from the front are a pair of tan BURPS with a special sloping hieroglyph brick, a mummy image, and two birds on it. In front of the entrance is an obelisk with hieroglyphs on it and a palm tree. There are two more statues of birds on the side of the structure. 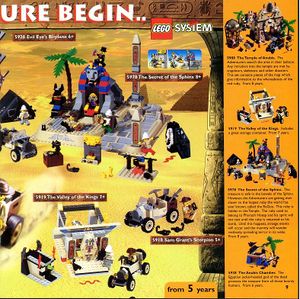 The other structure is behind the entrance. It is shorter but just as long and wide. It has a spinning door, on one end, which is a skeleton, and when turned around reveals a ruby in a glass case attached to it with a magnet. There is a hieroglyph brick above the door warning that whoever steals the treasure will get the curse of the mummy. Also on top of the door are a pair of birds. Within the room are a pair of crocodile statues, each with a goblet, drink, and inscription on them, and a pair of Anubis statues, each with fire in one hand and a spear in the other. In the centre of the room there is a throne with scorpions as feet. There is a palm tree and two bushes outside the structure.

The Pharaoh's Forbidden Ruins was the temple where the Legendary Re-Gou Ruby was found by the adventurers.

Note: This description is taken from the LEGO Catalog.

This is a description taken from LEGO.com. Please do not modify it. The Adventurers search area in their balloon. Any intruders into the temple are met by trapdoors, skeletons, and other disasters. This set contains pieces of the map which give information to the whereabouts of the red ruby. From 8 years.

Other Large Temples and Ruins