9471 Uruk-hai Army is a set in the theme The Lord of the Rings released in May 2012. The minifigures included are Éomer, a Rohan Soldier, and four Uruk-hai. It has a section of wall with a staircase, a torch, catapult, and a flag along with a horse and a ballista (a giant crossbow on wheels) that shoots flick-fire missile hooks. 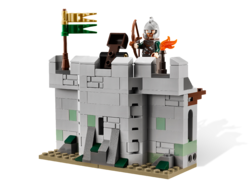 The front of the wall

The defensive wall sits on a pair of sand yellow 6x8 plates. At its base in the centre is a small formation of dark grey and dark green sloping bricks, achieving the effect of mossy rocks. The front section of the wall, that which is above the rocks at the bottom, is closer to the edge of the baseplate than the rest of the wall, which is three studs from the edge. The wall is light grey with several sand green 1x1 bricks dotting it in different places. Several special profile bricks are included, marking the wall with 'ruinous' details. These two unique additions to the set give it a more realistic feel and look. At each side of the wall, below narrow arches, is a 2x1 brick with two holes in it wide enough for a TECHNIC peg or rod to slide into. One of the bricks has black connector pegs inserted. This feature is so the wall can be attached to the Deeping Wall of Helm's Deep, a section of which this set represents, acting as an extension. The other side's holes are for the purpose of another wall to be connected to this one, making the set even larger.

The top of the wall has five bricks spaced evenly from each other, providing cover for the Rohan archer on top. A brown flag post is located on one side with two flags, one gold and the other dark green, attached to the top. On the other side of the wall is a torch.

The back of the wall has a brown staircase leading up to the top, where a platform resides underneath a small catapult and three brown cylindrical pieces as its ammunition. The catapult apparatus is easily removed and is seen in several images of the set to be located on the ground. 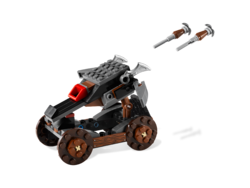 The ballista is made up of two sections, connected by way of several TECHNIC pieces.

The bottom section is comprised of a black frame and the pieces around it. Its four wheels are dark brown with lighter circular pieces in the centre. The wheels are attached to the frame by way of tan axle/pin connector pegs. In between the wheels on each side is a smooth reddish brown 2x1 piece with printing of a wooden board with rivets. Two grey sloping bricks line the frame on both sides. The front of the ballista is black with two brown studs. Connected to one of the studs and set at a diagonal angle is the wooden board piece.

The section that has the firing mechanism of the ballista has a dark grey underside lined with black. Two adjustable grey pieces stick out of either side as the "bow". In the centre of it is a 2x1 brick with a pair of holes in it. Inserted in these holes are the bolts, the giant arrows. The bolts consist of a rod piece in the back with a brown cone connected to that and a thin circular piece and grappling hook inserted into the cone. Two of these are placed inside the brick with holes. Behind that is the "trigger": a smooth 2x4 piece with a red tip that, when pushed in, forces the two bolts out of the holes, launching them at the wall. This section of the ballista is set on the frame at an angle by way of a bent TECHNIC piece.

Four Uruk-hai are included in the set. Each has the same torso and legs, with intricate printing of dark grey armour covering their stomach and what appears to be leather over their chest, back and legs. This printing is continued on the legs and back of the minifigures. The faces are dark red double-sided, with one side bearing yellow eyes and a snarl and the other similar, but with the white hand of Saruman printed on as well. Their armour and weapons are dark silver. The helmets are a new mould, based directly upon the helmets seen in the films. Two of the Uruk-hai come with helmets, armour and axes, with a third in only a helmet and the last with black hair. 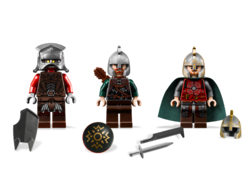 The minifigures in the set and the equipment

Éomer and the Rohan Soldier also sport detailed printing. Their helmets cover all but the face and have a crest on top. A piece covers the "nose" and two parts of the helmet extend over the cheeks as well. Éomer's differs slightly, as it has intricate gold designs lining it.

Éomer has printing is of a brown shirt with intricate white designs over some chain mail. He has a twisted and knotted belt with a gold buckle and printing of triangular chain mail on his legs. He wears an earth green cape, a colour not usually seen in minifigure apparel. Éomer's face has a ginger beard and moustache, with one side having a neutral expression and the other in a yell of fury.

The other minifigure has the triangular chain mail underneath leather on his chest, with a brown strap running diagonally across it. He has a belt with a grey buckle. He has a double sided face with a ginger beard on both, with one side bearing a frown and the other in a grimace.

An army of at least ten thousand Uruk-hai was sent to attack Helm's Deep, a large fortress where the people of Rohan went to defend themselves. Even in their castle and with the help of Elves and Haldir, however, the Uruk-hai began to overrun the Men of Rohan, first breaching the main wall and then rushing forth to invade the keep. At the last moment, Gandalf arrived with the Rohirrim, led by Éomer. Charging down a steep mountainside, the Riders of Rohan defeated and drove out the Uruk-hai.

This is a description taken from LEGO.com. Please do not modify it. (visit this item's product page) Repel the Uruk-hai Army at Helm's Deep!

Under attack by the evil Uruk-hai Army, the ancient fortress at Helm's Deep is the last refuge for the people of Rohan! As the Uruk-hai draw near, they fire hooks from the armored hook shooter and try to scale the fortress walls. Can Éomer and the Rohan soldier hold back the Uruk-hai and save the day? Includes 6 minifigures: Éomer, Rohan soldier and 4 Uruk-hai.