In the early years of the Matoran Universe, the Bohrok-Kal were created by the twin queens of the Bohrok swarms, Cahdok and Gahdok. The Bahrag exposed six Bohrok, one from each swarm, to a mutagenic substance. These Bohrok acquired new Elemental Powers, replacing their previous powers, and were piloted by Krana-Kal, advanced versions of the Krana worn by regular members of the swarm. They also gained the ability to communicate telepathically and speak the Matoran language. The Bohrok-Kal were fitted with silver armor and given special reptilian markings to distinguish them from other members of the swarms. They were then hidden in a special chamber far from the Bohrok Nests, and remained in hibernation for nearly 100,000 years.

After the Toa Mata used their elemental powers to trap the Bahrag in a Toa Seal and were subsequently transformed into Toa Nuva by means of Energized Protodermis, the Bahrag sent a telepathic signal for the Bohrok-Kal to awaken. The queens ordered the Bohrok-Kal to steal the Nuva Symbols from each village, bring them to the cave where they were imprisoned, and place them onto the Nuva Cube. The Bohrok-Kal completed the first step of their task with success, and the Toa Nuva were left powerless.

The Toa Nuva united and followed the trails of the Bohrok-Kal until they arrived at a tunnel entrance made by Pahrak-Kal. It led into a cave where the Toa Nuva found a hole which led to the Bahrag's lair. Feeling that the edges of the hole were still hot, they were careful and sent Lewa down it to survey activity below. Inside the lair, Lewa witnessed the Exo-Toa attempting to defend the Nuva Cube from the Bohrok-Kal. However, the Bohrok-Kal overpowered the machines and prepared to awaken the Bahrag. By the time that the Toa Nuva entered the chamber, the Bohrok-Kal had already touched the Protodermis cage with their Krana-Kal.

In desperation, Tahu called upon the power of the Kanohi Vahi, which he had received from Turaga Vakama. Slowing down time around the Bohrok-Kal, he ordered the Toa Nuva to retrieve the symbols, but the Bohrok-Kal's Krana-Kal turned silver and it created a shield blocking them from outside threats. Gali then conceived a plan to defeat the Bohrok-Kal. Reaching out to their Nuva Symbols, the Toa Nuva channeled their Elemental Powers through the Bohrok-Kal. This was too much power for the Bohrok-Kal to control and one by one, they fell to their own power. The Bahrag remained confined in their prison, and although the Krana-Kal managed to escape the destruction of the exo-shells, these were later captured by the Turaga.

The Bohrok-Kal were immensely powerful and effective in the use of their Shields to exert Elemental Powers. They were powered by Krana-Kal and could telepathically communicate in the Matoran Language.

The Bohrok-Kal also shared many of the physical characteristics of their Bohrok cousins, to include: 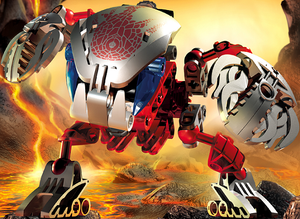 Tahnok-Kal, Bohrok-Kal of Electricity: Tahnok-Kal was the leader of the Kal, who's shield could control electricity. Tahnok-Kal was the first to discover that stealing the Toa Nuva's Nuva Symbols would cause their elemental powers to vanish. In the final battle between the Toa and the Kal, Tahu Nuva's connection to his Symbol caused Tahnok-Kal's electricity to fuse its moving parts together (although the comics claimed that it was merely paralyzed). The electrical energy formed a cage around him that didn't stop until he finally ran out of energy, and was overpowered by matoran that removed his krana-kal.


Gahlok-Kal, Bohrok-Kal of Magnetism: Gahlok-Kal is the blue Kal, who's shield grants it power over magnetism, and thus could be used for anything from stopping a Toa in it's tracks to a variety of more mundane tasks, such as shattering magnetic rock. In the final battle, Gali Nuva's connection to her Nuva Symbol caused Gahlok-Kal's magnetic energies to spiral out of control, and attract the smashed remains of the Exo-Toa armour, crushing the Kal. 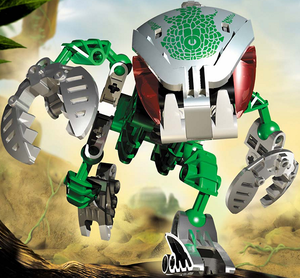 Lehvak-Kal, Bohrok-Kal of Vacuum: Lehvak-Kal is the green Kal, who's shield can suck in vast quantities of air, and release it with the force of an explosion. Lehvak-Kal likes to stick to the jungle, where it can remain hidden. In the end, Lewa Nuva's connection to his Nuva Symbol caused Lehvak-Kal's shiled to malfunction and launch itself into space (though the webisode involving the Bohrok-Kal's defeat showed that the connection caused Lehvak-Kal to fly apart).


Pahrak-Kal, Bohrok-Kal of Plasma: Pahrak-Kal is slow, but it sees all. It's shield grants it control over plasma, allowing it to melt practically anything. It was Pahrak-Kal who discovered the Bahrag's underground prison, melted its entrance, and led the other Kal to it. Eventually, Pohatu Nuva's connection to his Nuva Symbol caused Pahrak-Kal to melt a hole in the ground under him, causing him to fall presumably all the way to the planet's core.


Nuhvok-Kal, Bohrok-Kal of Gravity: Nuhvok-Kal is probably the most brutally powerful of the Kal. It's shield grants it complete control over gravity, and thus immense power, as Tahu Nuva discovered the hard way when the Nuhvok-Kal defeated him with one shield, and an entire swarm of Tahnok (whom Tahu was leading) with the other. In the end, Onua Nuva's connection to his Nuva Symbol caused Nuhvok-Kal's power to turn wild and turn Nuhvok-Kal into a black hole, killing it. 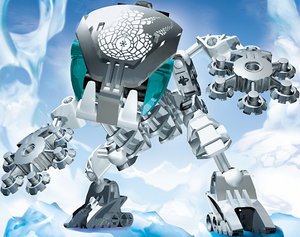 Kohrak-Kal, Bohrok-Kal of Sonics: While Nuhvok-Kal is the most powerful of the Kal, Kohrak-Kal is the most formidable. It's shield grants it power over sound, allowing it to do anything from creating sonic booms to making a wall out of solid noise. In the end, Kopaka Nuva's connection to his Nuva Symbol caused Kohrak-Kal to be shaken apart by the sonic vibrations of its malfunctioning shield.