A gear is a wheel with teeth on the outside. They are available in different size, colour and sort. For example, some are made for corners, and some gears can have plates put on. LEGO have produced gears of different types since 1965.

LEGO filed a Danish patent for gears on the 1st of March 1965. The first gears were released later that year by Samsonite, who manufactured them in the United States. They preceded the cross axle so had circular holes in the centre. They were attached to bricks using wheels. 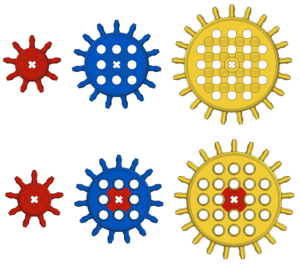 The European gears released in 1970.

In 1970, LEGO released the first set of gears in Europe. They were different sizes to Samsonite gears and were attached using axles, also new for 1970. A new 4x2 brick with holes, part 3709, was introduced for connecting the gears to models.[1]

These gears were introduced with the TECHNIC line in 1977. They remain in use today, but have been refined on various occasions to improve their strength.

Gears with a bevel on both sides were introduced in 1999.

A differential is typically used to drive wheels in a car.

There are also specialised gears: