Cookies help us deliver our services. By using our services, you agree to our use of cookies. More information
Navigation
Actions
Reviews
Fan space
ShoutWiki messages
Wiki tools
From Brickipedia, the LEGO Wiki
(Redirected from Star Wars Expanded Universe)

Star Wars Legends, formerly known as the Star Wars Expanded Universe, is a Star Wars subtheme of sets which originally came from outside the Star Wars films and The Clone Wars animated series.

While more sets were eventually released after 2007, only one was sold in 2004 and the years following it: the 10131 TIE Collection. This set contained a TIE Advanced and two TIE Fighters, all of which were in the Original Trilogy; however, the inclusion of a TIE/d Fighter made this set the first ever in the Expanded Universe line. 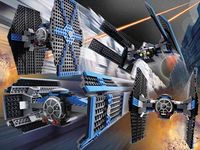 The 10131 TIE Collection, the first set to include Expanded Universe material.

The next year saw the release of the 7672 Rogue Shadow, which was to tie in with The Force Unleashed, the Star Wars video game and multimedia project released in the same year. The Rogue Shadow, the space vessel that the set was inspired from, was the main ship in the story. The set came with a Battle Damaged Darth Vader, along with Galen Marek and Juno Eclipse, both of whom became the first minifigures in the Expanded Universe subtheme designed to be specific individual characters.

After a one-year break, the Expanded Universe line returned with the release of the 8087 TIE Defender in 2010. The set featured the three-winged hyperdrive-and-shield-equipped starfighter of the same name, and featured a new TIE Pilot with a redesigned helmet modeled more closely on the helmet seen in the movies and other media, along with a Stormtrooper.

In 2012, two sets based on Star Wars: The Old Republic were released: 9497 Republic Striker Fighter, and 9500 Fury Class Interceptor, making them the first sets to be based on events in the Star Wars universe that occured prior to Episode I. 2013 saw continuation of The Old Republic sets, with the release of the sets 75001 Republic Troopers vs. Sith Troopers in the first wave and 75025 Jedi Defender-Class Cruiser in the second. In 2014, a polybag of Darth Revan was released, based upon the primary character from Star Wars: Knights of the Old Republic during the time he was a Sith Lord.

2015 saw the release of two Legends sets. 75079 Shadow Troopers is a battle pack based on Imperial troops from The Force Unleashed- Shadow Troopers and members of the Emperor's Shadow Guard. Meanwhile, 75087 Anakin's Custom Jedi Starfighter is a set based on Anakin Skywalker's personal starfighter, the Azure Angel, and is based upon the 2003 Star Wars: Clone Wars animated series.

Galen Marek, a character from the EU.