Arctic is a Town subtheme that was centered around arctic exploration. Most of the sets were released in 2000 and discontinued during 2001. The theme comprised a total of ten sets. It briefly returned in 2003 and 2004 with a few gear sets.

This is the first Town subtheme that involved arctic explorers. Although the basic subject had already been touched before by a Technic theme (Arctic Action) and a Space subtheme (Ice Planet 2002), this was the most realistic take on the subject in the LEGO universe. The sets featured several snow vehicles and a research station. The release of the theme fell directly into an era wherein LEGO sets showed an especially high intention for younger audiences, and thus many of the models had a very simplistic design. They tended to have larger parts, but less total parts. The Arctic sets were used extensively on the Arctic level of LEGO Racers 2, which has several bases, and almost all of the vehicles are drivable. 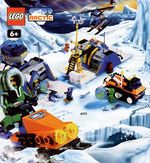 The background story behind the theme involved meteors that were falling to Earth in locations around the Arctic. The explorers tracked down the impact sites to collect these meteors, which were transparent hollow rock pieces that contained exotic alien creatures, such as transparent orange scorpions.

This theme was the first to feature translucent blue Rocks with Craters, minifigure hoods with fur lining, and minifigure snowshoes. Many of the sets also had the first Polar Bears and ice picks (1998 had them first).