The Phantom Clone is the third and final episode of The Yoda Chronicles.

Episode III ATTACK OF THE JEDI The tide of the war has turned. DARTH SIDIOUS' plot to create an army of SITH CLONES has failed, along with his other plot to clone the one CLONE the SITH did clone into CLONES cloned from that CLONE.

I have no idea what I just read. Let's just say the bad guys are losing.

A battle is in progress on Geonosis, which is quickly wrapped up with the help of Republic forces, including C-3PO and R2-D2 in a Z-95 Headhunter and the Jedi bus piloted by Mari. A medal ceremony then takes place in the Senate Chamber on Coruscant, much to Chancellor Palpatine's dismay. On Mustafar, along with General Grievous, Darth Maul and Asajj Ventress, Count Dooku addresses a group of children, stating that they will be the first members of a new Sith Academy, however the "Badawans" quickly manage to cause mahem for their teachers. Meanwhile, Commander Cody finds the Sith assembly and reports the find to Obi-Wan Kenobi.

The students of the new Sith Academy.

Kenobi reports Cody's news to Palpatine, who orders every ship to attack Mustafar. Palpatine then tells Count Dooku the news, prepares to leave Coruscant to lead an ambush. However, Palpatine is spotted by the Jedi, but makes the excuse that he wants to come along with the Republic to watch their victory, so Obi-Wan, Anakin and C-3PO accompany him. After Palpatine is late to arrive on Mustafar, Dooku orders Grievous to go and find him. Grievous attempts to contact Palpatine, but as he is with the Jedi, he orders Anakin to attack him. Grievous flees into a nearby asteroid field, and is followed by the Republic fleet. Eventually surrounded, Grievous escapes by entering hyperspace. The Republic fleet attempts to follow, but all crash into each other when trying to jump to lightspeed through a hole in one of the asteroids. 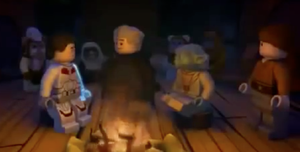 The Republic force attempts to convince Jek to help them.

On a large asteroid, Yoda wakes up on a large asteroid, with the Jedi, Palpatine and all of the pieces from the destroyed ships, however the Jedi children have managed to rebuild the Jedi bus. Despite this Yoda realises that they will not be able to rebuild the fleet in time, but Bene says that she knows of someone nearby who is able to quickly rebuild the fleet. Jek-14, building trees for Ewoks on Endor, is interrupted when Yoda, Palpatine, C-3PO and the Jedi children are caught by a trap. After initially resisting, Bobby manages to convince Jek to help them, and the party and Jek leave Palpatine with the Ewoks and C-3PO as Yoda feels the mission will be too dangerous for him. 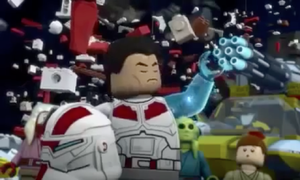 Jek using spare parts to create a ship for the Republic.

As Jek combines the parts from all of the destroyed starfighters into one large ship for the Jedi and clones to travel on, Palpatine is being driven mad by dancing Ewoks. Eventually feigning an allergy to Ewok fur, Palpatine runs away and leaves the planet with Jek's starfighter, which C-3PO is caught in yet another Ewok trap. However, on the way to Mustafar, Grievous spots Jek's starfighter and assuming that Jek is aboard, destroys it. The Republic forces leave, thanking Jek as they depart. Left alone, Jek begins to have second thoughts about not helping them in the upcoming battle. 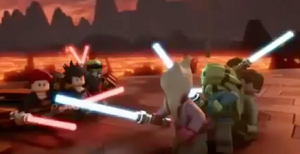 Jedi and Sith students engage in a duel.

Palpatine, now with Grievous in the cockpit of his starfighter, finally arrives on Mustafar. As he begins to plan the ambush with his Sith forces, the Republic ship arrives. Palpatine, saying that he was giving the Sith a chance to surrender, orders the Jedi to attack. Duels then break out between the more experienced Jedi and Sith, while the Jedi children quickly jump on Grievous and subdue him. However, the Badawans arrive, attacking the Padawans, while R2-D2 fights the Badawan's astromech droid. Dooku orders a squad of Droidekas to attack the Jedi, but Admiral Ackbar, still piloting the Republic ship, manages to take several out and keep the rest away by blocking off their path with rubble. 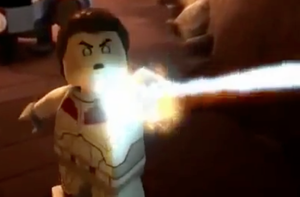 Jek destroys the Sith base.

While the Republic ship lands and clones are deployed, Palpatine excuses himself from the group, running to the Sith forces ordering them to hide wait behind a nearby rock. Running back, Palpatine tells the Jedi that the Sith have run behind another rock, and also slips a thermal detonator into the Republic ship as it takes off again. The Jedi order the clones to the rock, but are ambushed and taken out by the Sith, and shortly after the ship explodes. Palpatine excuses himself again, ordering the Sith forces and to crush the Jedi. As the Jedi are on the defensive and trapped on some rocks surrounded by lava, Jek arrives, flying a ship he constructed from the few remaining parts on the asteroid. Jek shoots lighting from his hand, quickly defeating the Sith and destroying the entire building complex. He then rebuilds the ship, and departs with the Jedi, clones and Palpatine. 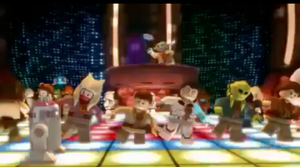 The Republic and Jedi celebrate.

A party (arranged by Lindo Calrissian) takes place in the Jedi Temple, and everyone receives a medal. Everyone is having fun except for Palpatine and Anakin, who is jealous of Jek. Palpatine agrees with Anakin about Jek not being so special, and the two compliment each other. Meanwhile, C-3PO, still in a trap on Endor, is relieved to see a group of Ewoks approaching. However, instead of helping, the Ewoks instead sing and dance around his trap. 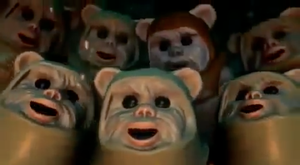 Palpatine is "entertained" by Ewoks on Endor.