8095 General Grievous' Starfighter is a Star Wars: The Clone Wars set released in July of 2010. The set consists of 454 pieces, and includes a redesigned General Grievous (Clone Wars), Nahdar Vebb, and A4-D Minifigures. The set also includes five Lightsabers (two green, three blue), which General Grievous can hold simultaneously as well as one for Nahdar Vebb, and a blaster. There is also a small medical chair used for repairing the General and a large missile which is stored on the underside of the starfighter. Some notable features include four hidden flick-fire missiles on either wing (two on each), a large missile underneath the starfighter, and an opening cockpit with controls. This is the second version of the starfighter released, the first being the 2007 set; 7656 General Grievous' Starfighter.

A rear view of the set.

The set is very comparable in size to the first version, but does include several new features. Unlike the first version, in which the whole centreline of the ship slid out to reveal the cockpit, the windshield slides independently. There is also a new windshield piece with special printing to give it the detail of having multiple panes. Inside the cockpit are the controls, and in order to place General Grievous inside, his two outer arms must be removed. On either side of the ship, in between the two wings, are the blaster cannons, with both having the ability to rotate up to a vertical angle and anywhere in between.

On the sides of the starfghter are the slightly redesigned wings, both of which have a hidden hatch in the centre. When opened, the hatches reveal two hidden flick-fire missiles, of which there are four in total. On the underside is also a large missile. At the rear of the model is a small stabilizer wing, which also acts as the back stand for the model. When standing straight up, it supports the back of the ship, and can be retracted when in "flight mode" to keep the model easy to handle. On either side of the back stabilizer wing are the engines, which are slightly beefed up compared to 2007's model, in addition to new, smaller engines located at the back of both of the side wings. 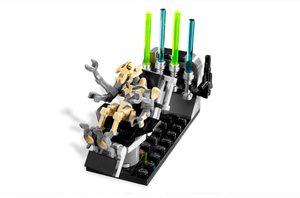 General Grievous on his service chair.

Also included is a small medical centre used for "repairing" General Grievous. There is a rotating chair, which holds Grievous, a place for A4-D to stand next to the chair, and a stand for the Lightsabers. Unlike 7656 General Grievous' Starfighter, where the Lightsaber holder was stored underneath the starfighter, this one is stored separately, on the platform with the chair.

General Grievous' Starfighter, also known as the Soulless One, was a customized, battle-worn Belbullab-22 Starfighter, constructed by Feethan Ottraw Scalable Assemblies for the Confederacy of Independent Systems (CIS) during the Clone Wars. The Belbullab-22 was much bulkier than the standard Droid Starfighters also employed by the CIS, but packed about as much firepower as a V-Wing Fighter. The ship packed powerful dual, rapid-fire triple laser cannons and two main ion drives. General Grievous added an onboard Holonet transceiver and built in a powerful hyperdrive, allowing the starfighter galaxy-wide travel. General Grievous' Starfighter was also involved in some major battles of the Clone Wars including the Battle of Geonosis, the Battle of Bothawui, and the Mission to Skytop Station.

This is a description taken from LEGO.com. Please do not modify it. (visit this item's product page) Lead the next attack against the Republic with General Grievous™!'
Returning to his secret lair to recover and plot his next attack on the Republic, General Grievous™ is attacked by a new Jedi Knight, Nahdar Vebb™. Assisted by his trusted droid assistant, A4-D™, and with his speedy starfighter nearby to escape, General Grievous will be difficult to stop!