8099 Midi-Scale Imperial Star Destroyer is a LEGO Star Wars set released in August 2010 as part of Classic Star Wars. The set is on a similar scale to the other midi-scale set, the 7778 Midi-scale Millennium Falcon. So far, this is the second midi-scale released. This set is sold in the US as a Special Edition set at the LEGO Store and Wal-Mart. 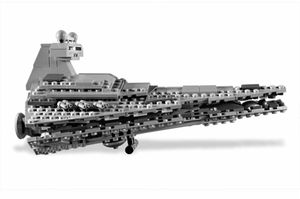 The ISD on its stand.

The Midi-Scale Imperial Star Destroyer is equipped with a stand for display. This set is mainly composed of Dark Stone Grey and light grey pieces.

Recent sources, however, state that at least several ISDs - then known as Imperator-class Star Destroyers - were in the service of the Republic during the the Clone Wars.

On an interesting note, Venator-class ships in Star Wars Episode III: Revenge of the Sith are shown in the final scenes with a gray color scheme identical to that of the ISD to symbolize Imperial transition.

This is a description taken from LEGO.com. Please do not modify it. (visit this item's product page) The infamous Imperial Star Destroyer™- now in midi-scale!

Appearing for the very first time in the opening scene of the first Star Wars™ movie, A New Hope,the Imperial Star Destroyer™ is the Empire’s most powerful warship and one of the most instantly recognizable in the entire series. This iconic ship now comes in midi-scale.