Template:Set 7675 AT-TE Walker was released on July 26, 2008 as part of the LEGO Star Wars: The Clone Wars line. The set consists of 798 pieces and includes Anakin Skywalker (Clone Wars), Ahsoka Tano, Rotta, Captain Rex, a Clone Trooper, and Battle Droid minifigure. The set also includes the main walker itself, and a small droid STAP, redesigned for the Clone Wars. Some notable features of the AT-TE include the ability open both the front and back hatches to reveal the interior, the opening cockpit with controls, the rotating roof-mounted blaster cannon, rotating front and rear ball turrets, and several removable modules. The AT-TE also has the ability to be picked up by the dropship from the set 10195 Republic Dropship with AT-OT Walker, via the retractable "handle" in the centre of the model. This is the second version of the AT-TE, the first being the 4482 AT-TE, released in 2002.

The set itself is quite large in size compared to other LEGO models comparable in price and piece count. It is almost equivalent in size to the Clone Turbo Tank. The set features the ability to open both the front and back roof hatches, giving access to the front and rear interiors. In the front are two seats, and a small removable module consisting of a cabinet, similar to the ones above the troop bay on the 2008 Republic Attack Gunship, which is located and stored directly behind the seats. In the back are four seats and a rack for four blasters all on a removable platform. These sections are protected by the outer armour, which can be opened or removed. Located at the top of the front roof hatch is the vehicle's main weapon, the rotating blaster cannon. There is another seat directly behind the weapon, for a Clone Trooper to man the gun. At the front of the model is the cockpit, with the opening windshield door, flanked by four rotating ball turrets. Inside the cockpit is the pilot's seat and controls which can all be removed together. There are also two more ball turrets located at the back of the model which also have the ability to rotate. Underneath the upper two ball turrets on the front of the walker are two spring-loaded missiles which, when triggered, can be shot out with some force. These are triggered by pressing down on the back of the two covers with the top two of the four ball turrets on either side of the cockpit until the rubber-tipped missile is released. These missiles replace the ubiquitous flick-fire missiles, present in almost every other set from this time period. 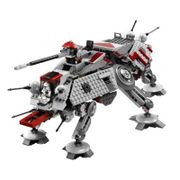 The set's cockpit with removable module. 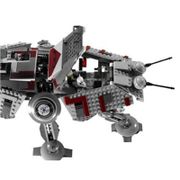 The rear interior of the walker.

The walker has six legs, two of which have the ability to move independently. The four main support legs are held in place by rubber bands which keep them in position when the walker is picked up. The two large legs in the centre are attached to the internal structure, but have the ability to move forward and back, and for the "feet" to move freely. The legs and connections to the feet have been drastically changed from the original release of this set back in 2002, the 4482 AT-TE, lifting the set higher off the ground and providing more flexibility. Also changed are the main blaster cannon, which was moved to the centre of the top front roof hatch and increased in size, and the interior, which was made larger and more open. In the original version, a small speeder bike, similar to the one from the Republic Attack Gunship, was included with the ability to store it in the back of the walker, also not unlike the Gunship. However in this model, the speeder bike was replaced by the STAP, supposed to give the set more "play factor" and effectively more functionality. In the centre of the walker is a handle used for transportation. It is built out of a TECHNIC beam with a small cross pin. It has the ability to fall back into its compartment when not in use, effectively hiding it from view. This "handle" can be used to carry the model by hand, but is also intended for the Dropship from 10195 to be able to carry it in addition to the AT-OT and Clone Turbo Tank. Interestingly, the walker was released in 2008, but the Dropship was unannounced and unknown to exist until early 2009, yet the walker was still provided with the handle functionality. 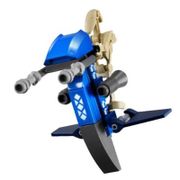 The small STAP, or Single Trooper Aerial Platform, included is similar to the ones included in the 2007 set; 7654 Droids Battle Pack, only redesigned with the Clone Wars colour scheme. It includes a place for the Battle Droid to stand and pilot the vehicle, in addition to the main blasters on the front. The whole STAP rests on a clear stand, meant to give the semblance of a "floating" or "flying" vehicle. There is also the addition of two small wings located below the droid, not present in the older versions of the STAP.

The AT-TE, or All Terrain Tactical Enforcer, was an all terrain assault walker used by the Grand Army of the Republic during the Clone Wars. The multi-purpose walker was used for many things ranging anywhere from transporting Clone Troopers, to full-scale attacks. They were often deployed in very large numbers to simply overwhelm enemies in sheer number. The walker had the ability to scale vertical cliffsides, and to be used in space combat. It carried enough fuel to travel 310 miles and enough recirculated air to last the crew three weeks. The walker was crewed by a group of ten Clone Troopers and Gunners, consisting of a pilot to control the legs, a spotter, a gunner for the upper mounted cannon, and four interior gunners for the walker's other weapons. The walker was impervious to ion damage because of its supplied electromagnetic shielding. The vehicle's most powerful weapon was a mass-driver cannon located atop the front section of the walker, capable of being loaded with a wide array of heavy energy weapons and various solid shells. Four smaller laser cannons were located around the cockpit, with two more located around the back of the walker. The walkers were very susceptible to direct hits from Hailfire Droids and various air attacks. The AT-TE was know as a precursor to the AT-AT Walker which that they were known they fought together for The Republic then The Empire but AT-TEs were not seen ever again.

This is a description taken from LEGO.com. Please do not modify it. Stomp all over the Separatists!
When droids attack, it's time to call in the mighty AT-TE! This powerful 6-legged walker features details straight from the Clone Wars, including positionable legs, movable cannons, firing missiles, and armored hatches and cockpit that open to reveal the cabin and troop bay inside. Even with its flying STAP vehicle, the battle droid doesn't stand a chance against Anakin Skywalker and the clone army of the Republic!

Retrieved from "https://en.brickimedia.org/w/index.php?title=7675_AT-TE_Walker&oldid=1399158"
Hidden category:
... more about "7675 AT-TE Walker"
RDF feed
Img1
Clone_Trooper.jpg +
Img2
Skywalker.png +
Img3
AhsokaFront.png +
Img4
7675-16.jpg +
Img5
BattleDroid1.png +
Img6
Minifig_rotta.jpg +
ShopDescription
Stomp all over the Separatists!<br / … Stomp all over the Separatists!<br />When droids attack, it's time to call in the mighty AT-TE! This powerful 6-legged walker features details straight from the Clone Wars, including positionable legs, movable cannons, firing missiles, and armored hatches and cockpit that open to reveal the cabin and troop bay inside. Even with its flying STAP vehicle, the battle droid doesn't stand a chance against Anakin Skywalker and the clone army of the Republic!* Includes Anakin Skywalker, Ahsoka, Captain Rex, Clone Trooper and Battle Droid minifigures, plus Rotta the Huttlet!* AT-TE Walker has 2 missiles that really fire!* Cannon on top rotates in all directions!* Hatches open to reveal the inside cabins and troop bay with 4 seats and extra equipment!* Open front to access the cockpit and to slide out the pilot seat!* Measures 15'½" (39cm) long and 8" (20cm) high!ures 15'½" (39cm) long and 8" (20cm) high! +
Txt1
Clone Trooper +
Txt2
Anakin Skywalker +
Txt3
Ahsoka Tano +
Txt4
Rex +
Txt5
Battle Droid +
Txt6
Rotta the Huttlet +