7672 Rogue Shadow was released in January 2008 as part of the Star Wars Expanded Universe theme. The minifigures included are a battle-damaged Darth Vader from his battle with Galen Marek aboard the very first Death Star, his secret Apprentice Galen Marek, also known as Starkiller, and pilot Juno Eclipse. It is the first and to date only LEGO Star Wars set to come from The Force Unleashed multimedia project making the set and its minifigures quite exclusive. This set is intended for ages 8 – 12.

The set features the Rogue Shadow, the sleek black transport which is the primary vehicle for the protagonists in The Force Unleashed. The body of the ship has three hidden compartments. The left compartment features a fireable cannon which can be moved into position and fired by a lever below the body. The back-right compartment houses two laser cannons which can also be deployed by pushing down a lever, and the front-right compartment contains two blaster rifles. In addition to the hidden laser cannons, the Rogue Shadow is armed with four other cannons (two small, one medium and one large) all mounted at the front of the ship. By rotating the Rogue Shadow's wings, the ship can change between landing and flying positions, due to the wings also rotating the ship's engines. The cockpit has a capacity for one pilot, and there are four retractable legs which serve as landing gear.

The Minifigures included in this set are Galen Marek who has torn clothing and a red lightsaber, a Darth Vader who also has a red lightsaber and is battle damaged from his fight with Galen Marek, and Juno Eclipse in Imperial uniform. Both Vader and Eclipse have two headpieces to choose from- Vader has his traditional mask, as well as a damaged mask (a piece which was actually once used as visors on Aquasharks masks), and Juno has both a standard black Imperial hat and a blonde hair piece. 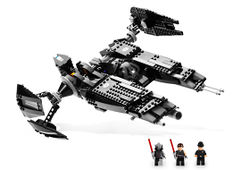 A high quality image of the set.

The Rogue Shadow was constructed by Sienar Fleet Systems, and was based on the Sith Infiltrator used by Darth Maul, the Scimitar. It was shield and hyperdrive equipped, armed with laser cannons, but more impressively had the fastest sublight engines in the Imperial Fleet, and had an experimental cloaking device on board. The ship's last known pilot was Juno Eclipse, who piloted it around several places for Marek's missions, and eventually using it to rescue leading members of what became the Rebel Alliance and escape from the Death Star.

This is a description taken from LEGO.com. Please do not modify it. (visit this item's product page) The Dark Side Unleashed!
Carrying Darth Vader's apprentice on secret missions across the galaxy, this sleek black starship with rotating wings and folding landing gear is fully armed with blaster cannons, hidden missiles, and a firing rocket to destroy your enemies.