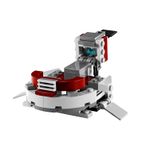 The clone command centre is small and of semi-circular design, with room for two to sit. The front of the command centre is comprised of a thick, curved blast shield. The bottom part of it is grey and is made using curved bricks. The top part is dark red, the colour of the Republic, and has a pair of bricks turned on their side to make the curve. A grey grill is set in the middle of this. Two hinged flaps on the sides form part of the walls, and can flip down to become ramps for access to the interior. The back of the command centre is tapered slightly and also uses bricks on their sides. The interior has black seats with no back or headrests. A small control console sits between them, featuring a radar-like display and several buttons, along with the number 38. In the middle and behind the seats is a raised section, grey with dark red highlights, with a hinge and clip attached to a square black radar dish. This entire section is connected by hinges, and the radar dish can be pushed down to reveal the second purpose of this section: once flipped back, a flick-fire missile is revealed and levelled, ready for launch.

The set comes with an assortment of extra pieces, most of which are for the Droidekas. These are a battle droid arm, a T-bar, a lever, a light stone grey pistol, a reddish brown stud and a curved spike. The pieces for the command centre are a transparent blue stud and a 1x1 square tile in dark stone grey.

The two clone troopers are nearly identical, each in white armor with black hands, hips and highlights, and grey shadows. They wear utility belts with two extra ammunition cartridges. Their helmets have a small crest on top and feature a T-visor slit with a breathe filter system at the bottom. To signify rank and distinguish him from his fellows, the clone sergeant sports green highlights on his helmet, as well as green arms. Both clones carry the same blaster, and the sergeant additionally carries a pair of electrobinoculars. 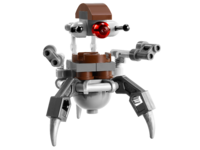 The two Droidekas are identical and of a new design; the fourth so far. They most closely resemble the third, just with a smaller back and arms and a slightly narrower head. These Droidekas also have something in common with the second variant, being the only other design to sport metallic parts. Most of the pieces making up the Droidekas are upside-down, due to the fact that a dome in this position was needed for the underside. They have three silver legs tapered and curved into points at the ends, connected to a brown and grey midsection. Two clips extend from this section, one on each side. Attached to these clips are pieces previously used as pistols or fire hoses, but now representing the arms. At the end of each of these arms is a piece used often as binoculars: a pair of small tubes. In this case, they are ideal as the dual-blaster design of each arm. The Droidekas' backs are B1 Battle Droid arms clipped to bars at the back of the midsection and head. The head itself is characterized by the two antennae projecting from the sides, its bulbous, transparent red photoreceptor and the curved 1x4 reddish brown piece that arcs over it all. As with its predecessors, this version of the Droideka is unable to fold into a ball shape to roll, its method of travel.

The Forward Command Centre was used by the Republic from the beginning of the Clone Wars, during the The First Battle of Geonosis and several others afterward. From it, a large area of a battle could be controlled. After arriving at that first battle, Yoda was taken to the Forward Command Centre where he directed ranking clone troopers in the command of their troops, resulting in the destruction of several Trade Federation ships and the eventual Republic victory.

Droidekas were not known to have assaulted command centres such as these, though they were well known to be difficult to contend with due to their swift traveling capacity, rapid firepower and shielding, which only a grenade or rocket launcher could easily penetrate.

This is a description taken from LEGO.com. Please do not modify it. Stop the droideka attack on the command station!
Watch the horizon from the Clone Commander’s command station! Use his electrobinoculars to spot 2 droidekas advancing on their position. Help the Clone Trooper repel the rolling Droids with a hidden flick missile before they come within range! Recreate epic battles from Star Wars™: Episode II Attack of the Clones. Includes 2 minifigures with assorted weapons and an accessory: Clone Commander and Clone Trooper.


Watch the horizon from the Clone Commander’s command station! Use his electrobinoculars to spot 2 droidekas advancing on their position. Help the Clone Trooper repel the rolling Droids with a hidden flick missile before they come within range! Recreate epic battles from Star Wars™: Episode II Attack of the Clones. Includes 2 minifigures with assorted weapons and an accessory: Clone Commander and Clone Trooper.