Harry Potter and the Chamber of Secrets was a sub-theme of Harry Potter released to coincide with the the second installment of the film series in 2002. It is also featured as a story in the video game LEGO Harry Potter: Years 1-4. 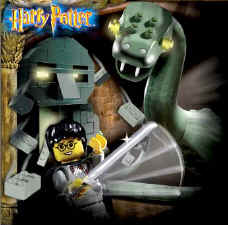 Harry is back with the Dursleys (his uncle Vernon, Aunt Petunia, and their obese son Dudley) for another terrible summer due too the Dursleys' hatred for anything to do with magic. However, Harry is visited by the house-elf Dobby in his room, who warns him not to return to Hogwarts. Harry refuses, as Hogwarts is the only place he can call home, and Dobby responds by dropping a pudding on Mr. and Mrs. Mason. Ron Weasley and his brothers Fred and George arrive in the Flying Ford Anglia and rescue Harry, taking him too the The Burrow. However, when it is time to go to Hogwarts, the barrier to get onto Platform 9 3/4 had sealed itself on Harry and Ron. The two decide to fly the Ford Angelia to Hogwarts, but end up crashing it into the Whomping Willow and are nearly expelled.

At Hogwarts, Harry is the unwanted center of attention from the incredibly self-centered new Defense Against the Dark Arts teacher, Gilderoy Lockhart. Events take a turn for the worse when the The Chamber of Secrets is opened and a monster stalks the castle, Petrifying several Muggle-born students and Filch's cat, Mrs. Norris. Harry, Ron, and Hermione Granger attempt to discover the Heir of Slytherin's true identity by using Polyjuice Potion brewed by Hermione to disguise themselves as Slytherin students, Vincent Crabbe and Gregory Goyle, hoping to learn from Draco Malfoy the identity of the Heir.

Draco Malfoy, they learn, does not know the identity of the Heir of Slytherin. The attacks increase throughout the year, petrifying more students, including Hermione and Colin. Harry and Ron then discover a diary, of which Harry is later sucked into. A memory of the former owner of the diary, Tom Riddle, accuses the Half-giant Hagrid and his pet Acromantula for opening the chamber and the death of a girl. Harry and Ron decide to visit Hagrid to inquire him about the accusation. While visiting, with him, Lucius Malfoy and Professor Dumbledore enter the hut. The two inform Hagrid that he shall be moved to the wizarding prison, Azkaban. Hagrid claims that he is innocent, and that if anybody wanted real information, they would "follow the spiders." Malfoy then informs Dumbledore that he too, will be forced to leave Hogwarts.

Harry and Ron later venture into the forest to follow the spiders. They come to find the giant spider Aragog, and learn from him of Hagrid's innocence. Aragog's family then attack Ron, Harry, and Fang, Hagrid's dog. The three escape in the Ford Anglia which has turned wild in its time in the forest.

Then, a message written on a wall declares that Ginny Weasley has been taken into the Chamber. With the help of Ron, Lockhart, and Moaning Myrtle, Harry discovers the entrance to the Chamber of Secrets. Once they find the entrance to the Chamber, Lockhart (who is discovered to be a fraud who wipes clean other wizards' memories and claims their achievements) attempts to use Ron's broken wand, which was broken when the Ford Angelia crashed, to erase Harry and Ron's memories, but the spell backfires on to himself.

In the chamber Harry meets Tom Riddle, the memory preserved in diary who was discovered to be Slytherin's Heir. Harry then battles Salazar Slytherin's Basilisk, killing it with the sword of Godric Gryffindor, which came out of the The Sorting Hat brought by Dumbledore's pet Phoenix, Fawkes. Harry inadvertently makes it so Dobby is freed from his master, Lucius Malfoy, and a potion is made from the Mandrakes so that all the Petrified students are restored.

Sets Released Specifically for the Movie

Sets That Also Include Aspects From Other Movies And Books