Harry Potter and the Goblet of Fire is a subtheme of the Harry Potter theme, and is based on the 2005 film of the same name. Only four sets have been made for the subtheme. It is also the last chapter in the video game LEGO Harry Potter: Years 1-4. 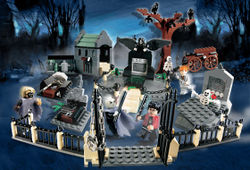 Harry's fourth year at Hogwarts is about to start and he is enjoying the summer vacation with his friends at the The Quidditch World Cup Final. After the match is over, however, Lord Voldemort's followers (known as Death Eaters) attack the wizards present, and Voldemort's symbol, the Dark Mark, ominously appears in the sky.

This year, Hogwarts is hosting the The Triwizard Tournament, a magical competition between three schools of magic: Hogwarts, Beauxbatons, and Durmstrang. The contestants have to be above the age of 17, and are chosen by a magical object known as the Goblet of Fire.

On the night of selection, however, the Goblet spews out the names of Cedric Diggory, Viktor Krum, and Fleur Delacour, but then the Cup has chosen a fourth name and Harry is unwittingly selected as the Fourth Champion. Since the magic cannot be reversed, Harry is forced to enter and brave three exceedingly difficult tasks. Harry gets past the Hungarian Horntail dragon in the first task, and he rescues Ron and Fleur's sister, Gabrielle Delacour, from the Mermaids in the Black Lake.

In the third task, a maze, both Cedric and Harry reach the Triwizard Cup at the same time and it teleports them to the Little Hangleton graveyard where Peter Pettigrew, under orders from a barely-living Voldemort, murders Cedric, performs a ritual over a burning cauldron, adding the final ingredient of Harry's blood, and then throws the barely alive Voldemort into it. A fully revived Voldemort emerges from it and summons the Death Eaters with the Dark Mark. After explaining to them how he lost his powers to them and Harry, he duels Harry Potter, in which their spells join in a chain. Harry breaks the chain and gets Cedric's body. After grabbing the cup again, he is transported back to the school where everyone learns that the Dark Lord is back, and has killed Cedric.

Mad-Eye Moody takes Harry to his office in order to help Harry calm down, but Moody suddenly starts to change and morph shape. It is revealed that Moody is actually Barty Crouch Junior, a follower of Voldemort, disguised with Polyjuice Potion as Moody and it was he who entered Harry into the tournament and made sure Harry made it past the tasks to end up in the graveyard and revive Voldemort.

With the Tournament over, the schools depart and Harry leaves once more for the Dursleys' for the summer.

Sets Released for the Movie

Sets That Include Allusions To This Movie/Book