This article is about the figure. For the set, see 5813 Lightning McQueen.

Lightning McQueen is a car from the Cars theme of the same name. He was first released as a DUPLO version in 2010, but was later remade as a brick-built system car in 2011. To date, Lightning McQueen has eight designs, both System and DUPLO.

To date, LEGO has made 11 variants of Lightning McQueen over the three years since LEGO Cars and Cars 2 were released.

In June 2010, LEGO made their two first Lightning McQueen cars in DUPLO. One of these was the Cars racing design. This variant had two pieces. One was the basic DUPLO Cars wheel piece, and the other was the DUPLO Lightning McQueen mold that fits over the wheels. This piece had many markings including a smile, lights, '95' printed on flames and exhaust pipes on the side panels, 'Rust • eze logo, eyes, and windows among other things. 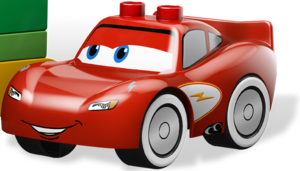 Hotshot rookie race car Lightning McQueen didn’t care about anything but fame and racing…until he got lost in Radiator Springs and met his new friends!–LEGO.com


Lightning McQueen's first System variants were released in May 2011. There were many System variants released at this time. The first of these was his Radiator Springs design from 8200 Radiator Springs Lightning McQueen. This variant features many sponsor stickers, red wheels, as well as his other printings–smile, eyes, windows, '95,' lightning sign, exhaust pipes, and lights. His back tail is hinged up vertically, and he has no backlights, given the make of the tail. 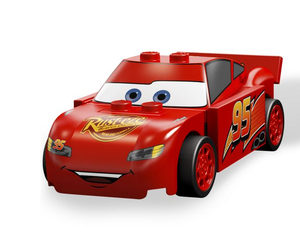 With his shiny new red rims, Lightning McQueen is back on the racing circuit and ready to burn rubber. Can he beat the odds and take home the championship?–LEGO.com
Another of his first System variants is Lightning McQueen's Cars racing variant. This variant featured an open mouth, '95' printed on flames on his side panels, exhaust pipes, lights, eyes, and windows. This variant, like the radiator Springs variant, has a hinged back tail, but unlike the Radiator Springs variant, McQueen has markings on his tail.

One of the first System Variants of McQueen is an "Ultimate Build", 8484 Ultimate Building Lightning McQueen. For information about this variant, please see the set.


Lightning McQueen has three Cars 2 system variants. The first of these was released in 8423 World Grand Prix Racing Rivalry. This variant has a red 2x8 baseplate with a blue 2x6 baseplate on top, and green 1x2 inside pieces. In this variant, McQueen has a redesigned tail than from his Cars variants. Lightning McQueen in this variant has back red lights, a flat 1x4 red brick, with 'World Grand Prix' printed on the top as his tail. He also has another 1x4 flat red brick on his back, this one printed with 'Powered by Allinol.' The wheels of this variant are white, rimmed with gold. McQueen's side panels are printed with '95' printed on flames, and exhaust pipes. He has lights, a frowning mouth, 'Hudson Hornet Piston Cup' printed on his hood, side windows, half-closed eyes, and printings on his roof.


The second of Lightning McQueen's Cars 2 variants released in 8679 Tokyo International Circuit. This variant has a red 2x8 baseplate with a blue 2x6 baseplate on top, and yellow 1x2 inside pieces. All of the three early Cars 2 variants have the same printings. 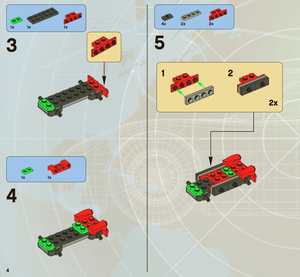 The colour of bricks in Lightning McQueen from 8639 Big Bentley Bust Out.

The third of Lightning McQueen's Cars 2 variants released in 8639 Big Bentley Bust Out. This variant has a light grey 2x8 baseplate with a black 2x6 baseplate on top, and green 1x2 inside pieces. All of the three early Cars 2 variants have the same printings.

In May 2011, McQueen was also released in his Cars 2 DUPLO variant. While the same two molds were used, this variant had different printings. These printing consists of eyes, mouth, windows, 'Hudson Hornet Piston Cup', lights, exhaust pipes, light grey/silver, black, and yellow wheels, along with '95' printed on flames.

McQueen is not about to let Francesco steal the victory that is rightfully his. So if Francesco wants to insult him, McQueen is more than ready to get him right back with a bumper sticker of his own! “Ka-ciao, Francesco!”–LEGO.com


In 2012, LEGO released a final to-date system Lightning McQueen. This McQueen was a newer Cars 2 variant. While it was similar to his older Cars 2 variant, there were a few changes made. The wheels in the old variant had gold hubs, whereas the wheels in the newer variant had red hubs. This variant also had a new face expression, the lights are turned on, and he has a plate displaying 'Ka-Ciao, Francesco!' at his rear. Lightning McQueen's tail in this variant was also built differently to the one from the last variant.

In Pixar's Cars movie, Lighting McQueen, a Piston Cup race car, had a dream to be the first rookie to win the Piston Cup. He was cocky and only cared about himself, wanting everything to his own way. He competed in the annul Piston Cup race, where he ended up in a three way tie between him, the present Piston Cup Champion, Strip "The King" Weathers, and Chick Hicks. A tiebreaker race was declared, and Lightning McQueen set out to California where the race was to be held. 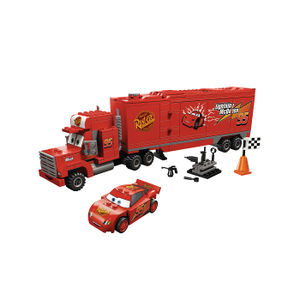 After being refused by McQueen to take a rest, Lightning's hauler, Mack, drifted off to sleep, and veered to the side of the road. The bumping around opened the back door of the trailer, where McQueen, still asleep, rolled out from the back. Lighting woke up and raced after Mack, but he followed the wrong truck, and found himself lost. When he followed what he thought was the interstate, he unknowingly took the path towards Radiator Springs on Route 66.


As he raced along, Sheriff, the local police car, followed McQueen in pursuit. He got tangled in the statue of Radiator Spring's founder, Stanley, and pulled in of its base. Then he zoomed away, ripping up Radiator Spring's main road in his wake. When Sheriff eventually caught McQueen, he took him to court, from which he was sentenced to fix the road. The going was slow, and McQueen hated it, even more so when he heard that Chick had already beaten him to California. He then finished the road by rushing it, but was forced to scrape it off and start over. 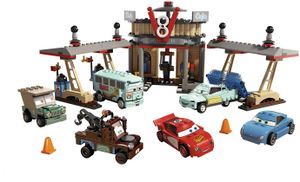 He eventually finished the road, and befriended all of the other cars at Radiator Springs, especially Mater, a rusty old tow truck, whom he became best friends with, and Sally, who became his girlfriend. There was one car, however, who didn't like him: Doc Hudson, who turned out to be the missing race car champion, the Hudson Hornet. Doc contacted, Lightning's manager, giving him McQueen's current location. There, McQueen was forced into Mack's trailer by the crowd of reporters and fans, and set off to California.


When the race began, McQueen lost his focus, worrying about his friends back at Radiator Springs, until Doc and the Radiator Springs gang filled in for his pit crew. Lightning McQueen was in the lead, until Chick sent The King into a brutal crash. McQueen saw what had happened, and remembered what had happened to Doc Hudson. He stopped right in front of the finish line, letting Chick win, and pushed The King over the finish line. After the race, McQueen was given the offer to join Dinoco from Tex Dinoco, but he declined, preferring to stay with Rust-eze. 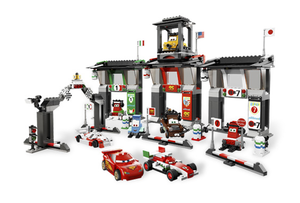 The first race, at Tokyo

Lightning McQueen won second to Francesco Bernoulli in the first race of the World Grand Prix because of a communication error with Mater, who unintentionally told him to do the wrong move. Two racecars flamed out in the first race, for some unknown reason. Lightning blamed Mater for his losing, and the two got in a fight, which resulted in Mater leaving.


McQueen and the remainder of his crew then traveled to Italy, where the second race was to take place. First they went to Luigi and Guido's hometown, where he told Luigi's uncle about Mater leaving. Then they went to the racetrack.


The second race of the World Grand Prix resulted in Lightning McQueen winning, followed closely by Francesco. For some strange reason, four racecars flamed out, which resulted in a huge crash. Allinol was blamed for the cars flaming out and cars stopped drinking it. The cars were then allowed to choose their fuel for the next race, and Lightning chose Allinol, saying that his friend Fillmore said that his fuel was safe, and that he hadn't believed a friend lately, and now he was sorry, and he wasn't going to make the same mistake again. 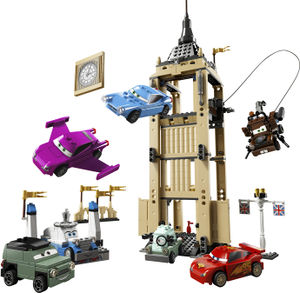 In London with McMissile, Mater, and Holley

Lightning and his crew then traveled to London, where the last race was to be held. He called Radiator Springs to talk to Mater, but Mater wasn't there. The other cars came from Radiator Springs to London. When McQueen came to the pits during the race, he found Mater there, but Mater drove away from him. Although McQueen didn't know it then, Mater had a bomb strapped to him. McQueen caught up to Mater, but Mater activated some set rockets and a parachute and flew away, Lightning holding on to Mater's tow cable all the time. The two finally landed, and were met by Holley Shiftwell, a British spy, who told McQueen that Mater had bomb strapped to him. British Spy Finn McMissile came with Professor Z, an antagonist lemon car. Mater unintentionally activated the bomb, but then they were surrounded by lots of antagonist lemons who wanted to kill Lightning McQueen and stop cars from using Allinol and every other type of non-oil fuel because they had found the biggest oil reserve in the world and wanted to become rich. The rest of the cars from Radiator Springs then rescued lightning McQueen, Mater, Holley Shiftwell and Finn McMissile. The remaining lemons retreated but were met by Sarge and his British army friends, who captured the remaining lemons.


Mater said that he knew who had strapped the bomb to him, and McQueen and Mater flew off. They landed at the place where the Queen was watching the race, and Mater accused Miles Axlerod of putting the bomb on him. It turned out the Mater was correct, and Miles Axlerod was captured.