Watch Commander is a Space Police Minifigure who appeared in The Adventures of Clutch Powers.

The Watch Commander has the exact same torso, legs, arms, hands, and helmet as a standard Space Police Officer. Although, his head has some different designs and he does not wear any type of oxygen tank on his back.

His legs are dark grey with some futuristic pouch designs, his torso is dark grey depicting a black belt, some chest plates, and a red badge at the center. His arms are dark grey and his hands are black, depicting gloves. His face is yellow with thick eyebrows and a marked chin. 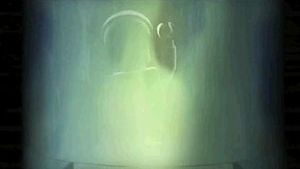 The Watch Commander inside Omega's canister.

The Watch Commander was present on Planet X4 during the escape of three criminals, Mallock the Malign, Omega, and Squidman. He kept the situation under control, by disabling all the cruisers so they wouldn't be able to escape and keeping safe, until he was locked in Omega's prison canister. After that event, Clutch Powers and his team arrived, with the intention of defeating the escaped prisoners. The Commander begged for help, although his image and voice were blurred, due to being in a canister, making Brick Masterson mistake him for an enemy and almost shoot him with a blaster.

The prisoners soon entered the room and temporarily immobilized the team. When getting up, Bernie Von Beam accidentally shot the canister open, freeing the Watch Commander and surprising the team that he had been on their side. The Watch Commander then noticed that the prisoners escaped in the team's Galactic Enforcer of which they left the doors unlocked, the keys inside, and the Manual on the dashboard carelessly. The Watch Commander told them of his disappointment in them and how their "bickering and squabbling" was now responsible for the freeing of three of the most notorious criminals in the known universe.

The Watch Guard remained on the planet after the team departed for the Kingdom of Ashlar, using a new vehicle that Clutch Powers built using the remains of the two other Space Police III spaceships.

The voice of the Watch Commander was provided by Gregg Berger. Gregg Berger is known for providing his voice in many video games and television shows. Gregg also provides the voice of Rock Powers in the same movie. Both characters have very short speaking roles in the movie.