Bernie Von Beam is an engineer who worked for the LEGO Organization in the movie: The Adventures of Clutch Powers. 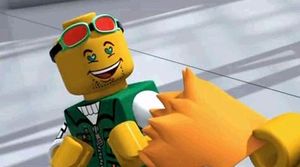 Bernie Von Beam is a brilliant engineer who works for the LEGO Organization. He is rather nervous at times, and appears to be quite high-strung, although a bit shy. He was given the role of serving Clutch Powers' new Brick-Building Team by Kjeld Playwell.

After meeting the team, Brick Masterson develops a slight joy in scaring Bernie, due to his nature of getting scared easily, which continues throughout their mission to stop the escaped prisoners of Planet X4.

He also develops a crush on Peg Mooring after she hands him his hair piece after it fell off in a rough entry into a conference room. Bernie repetitively tries to gain Peg's attention by supporting whatever she says, although sometimes she fails to notice, embarrassing himself.

Clutch Powers' Brick-Building Team was assigned by Kjeld Playwell to investigate the situation on Planet X4 after receiving a distress signal from the planet's prison guarded by Space Police. They then embark on a long journey, which brings them from Planet X4 to the Kingdom of Ashlar, where they must all work together to defeat the evil Mallock the Malign.

They discover that the only way to defeat the wizard is through Prince Varen's usage of the Golden Sword. Clutch sets off to find the Prince and succeeds in doing so, while Bernie and Brick come over a disagreement on how the Battle Wagon should be built. Bernie wants to use the Instruction Manual while Brick wants to build impromptu. This opens up to a battle scene where Clutch and Varen are captured, and everyone else flees.

After retreating from a battle, Bernie finally sets his differences between him and Brick and finally tells Peg of his affection for her, although also tells her that he isn't sure if he could built a vehicle for rescuing Clutch and Prince Varen. In response, she gives him a kiss and this encourages him to make a really good vehicle. He even lets Brick drive. Soon, the trio rescue Clutch, and Prince Varen defeats the evil Mallock by using the sword's power to chain him up. Mallock is then put in prison, and the adventurers are given their next mission, finding the other two criminals.

On normal occasions, Bernie has orange legs with pouch designs on the sides, white arms with pouch designs, a torso which depicts him wearing a green jacket with pouches and a zipper, and a yellow face with a small beard at the bottom of his chin. He has yellow hair and wears goggles on his forehead all the time, barely every using them to cover his eyes. He has green eyes. He also wears a Mars Mission uniform later throughout the movie.

Bernie has appeared exclusively in LEGO's first movie, The Adventures of Clutch Powers. He is the genius of the group, and has a natural rivalry with Brick Masterson, the group's strength.