“The earth will tremble when I have my revenge!”
―Von Nebula 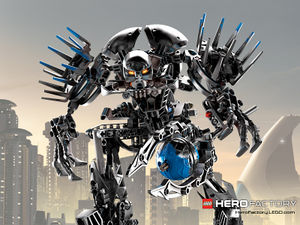 Von Nebula is shown to be armoured with two Bohrok shells on his back, a Piraka finned foot as a breastplate, Toa Metru feet at his upper thighs, Rahkshi legs as heels and the piston introduced in 2006 as the front part of his legs, and it is protected by Skrall armour. He has Toa Mata feet (the very first BIONICLE feet) and his arms are protected by the same spikes as 7147 XPlode. His arms don't appear to be bendable at the elbows, but the hands have a visual upgrade from previous titans: the hands are held the same as with smaller sets and the claws (Piraka claw feet) are an extension of them, so the hands can move upwards. The staff has two 8945 Solek blades and a recoloured Tridax Pod. It is the same blue as the end of the shoulder spikes. As shoulder reinforcement he uses the same parts as the arms and legs of Throwbots. His head consist of 4 parts: an orange Glatorian head with a black version of 8923 Hydraxon's mask and two of the parts used in the claws of 8919 Mantax and 7148 Meltdown. He has a foot piece that was common for the Piraka as his hands.

Von Nebula, also known as The Mastermind, is the leader of a powerful gang of villains. His weapon is the Black Hole Orb Staff, which, as its name suggests, creates black holes.[1] Von Nebula was once a member Preston Stormer's first team, known as "Von Ness." However, on a mission with Stormer's team, the mission almost failed due to his cowardice; it nearly caused Stormer's death and the destruction of a city. Von Ness blamed Stormer, and left the team. After a disappearance, he returned later as the criminal Von Nebula, intent on destroying Hero Factory.

Von Nebula is a master at organizing and planning attacks. His insignia is similar to a recycle sign, his quote is "The world will tremble when I have my revenge!". He is sucked into his black hole staff. In the clip at the end of the Hero Factory episode "Von Nebula", a fly is sucked into Von Nebula's Black Hole Orb Staff.

Von Nebula returns in the Breakout series of 2012 masterminding a plot involving Black Phantom and Voltix to release all the villains, steal the Hero Factory blueprints and destroy Hero Factory. He succeeds in releasing the villains and stealing the blueprints.

As his nickname suggests, Von Nebula seems to have planned both unrests in Makuhero city. He seems to be the arch-nemesis of the Hero Factory.

This is a description taken from LEGO.com. Please do not modify it. (visit this item's product page) Cause mayhem and chaos with the powerful Von Nebula!

Galactic Alert! Mission Control Center reports that the mysterious Von Nebula is ready to attack! He is heavily armed and highly dangerous. Beware of his spiky armor and his deadly staff, with the power to generate black holes. He is out for revenge against the Hero Factory!

$39.99</div></div>e:Flag-NZ.png|NZ|x12px|link=]] $39.99
+
Released
2010 +
SetType
Regular sets +
ShopDescription
Cause mayhem and chaos with the powerfu … Cause mayhem and chaos with the powerful Von Nebula!</br></br>Galactic Alert! Mission Control Center reports that the mysterious Von Nebula is ready to attack! He is heavily armed and highly dangerous. Beware of his spiky armor and his deadly staff, with the power to generate black holes. He is out for revenge against the Hero Factory!</br></br>* Mysterious leader of a group of powerful villains</br>* Von Nebula will stop at nothing to get his revenge!</br>* Use the staff to make living black holes to swallow surroundings!</br>* Stands over 9” (22cm) tallsurroundings!
Theme
Hero Factory +
Title
Von Nebula +
Type
Set +
USPrice
$19.99 +