76000 Arctic Batman vs. Mr. Freeze: Aquaman on Ice is a DC Universe Super Heroes set released in 2013. It includes Aquaman, Arctic Batman, Mr. Freeze, the Batboat, and an ice prison.

The main part of the set is the Batboat which is coloured black with yellow highlights. The front is rounded and has black ears to give it a head shape similar to the bat-head on Batman's logo. The cockpit is set a bit back behind the head and between two pontoons which also have skis fitted on the sides. The boat features a long, angular, transparent brown canopy with a target directly in front of Batman's eyes as he pilots it from the inside. In the siding between in the pontoons yellow disks can be launched by hitting a grey button behind them. A batwing-fin details the back and a flame exhausts from the back.

Another section of the set is the ice-prison which is a brick-high layer of white bricks and slopes topped with plates and two transparent blue rock pieces re-purposed as ice. Hitting down on a white lever causes the blue ice pieces to split and allow Aquaman to escape. 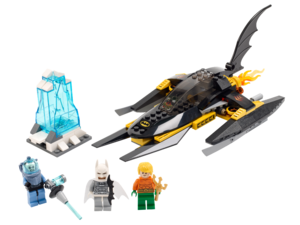 Aquaman has a yellow hairpiece that covers the back of his head and swerves out of his eyes in the front which was previously used on Max, the Skater, and several others. His face has nougat lines to make it thin and orange-yellow eyebrows. He has a neutral expression on one side and an angry one on the other. He wears a tight orange shirt which his muscles show through. He has a few darker orange scales scattered around his torso. He wears a belt with a large, stylized "A" buckle with ridges pointing inwards on the belt. He has green gloves and legs and carries a golden trident.

Batman wears a white cowl over his face with openings over his white eyes (achieved by a headband being printed above his actual eyes on the head below) and mouth. The brow is moulded into a permanent scowl and has two bat-shaped ears poking up. The expression revealed through the hole over the mouth is a neutral one, similar to but not exactly the same as Aquaman's. His face is double-sided with a large smirk on the reverse. Also like Aquaman, Batman wears a tight costume, this time light grey. A white oval is one his chest with a darker grey batsymbol inside. He wears a white utility belt with an ovular buckle and a packet on either side. He has white gloves tights over his hips and light grey legs. He carries a black batarang which is two batwings connected by a bar.

Mr. Freeze uses a large helmet which covers over his head, most of the front of his torso, and has two tanks moulded on into the back. His face is revealed to have sunken blue eyes and an angry expression through a transparent light blue visor. Though his torso is mostly covered, it is black with blue and silver tubes and machinery. He has black hips and gloves but blue arms and legs. He carries an ice gun made of a science-fiction esque blaster pistol with a blue cartridge at the side and a grey dish with a nozzle in the front with a light blue beam shooting out.

The set depicts Mr. Freeze capturing Aquaman in a frozen prison, and Batman coming to save him in the Batboat.

This is a description taken from LEGO.com. Please do not modify it. (visit this item's product page) Put the heat on Mr. Freeze and come to the rescue of Aquaman!
Mr. Freeze has trapped Aquaman in a block of ice and only Batman™ can release him! Speed to the rescue in the powerful Batboat with exhaust flames, deploy the missiles and release the bombs to bust that block of ice. It's time to turn the heat up on Mr. Freeze! Includes 3 minifigures: white Arctic Batman™, Mr. Freeze and Aquaman, all with assorted weapons.