The set comes in four numbered bags, along with one bag for larger parts, a sticker sheet for the set's three stickers, and two instruction booklets. The first two numbered bags make up the steam roller, while the final two are for the Batwing. 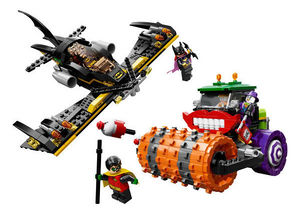 A view of the overall set.

The steamroller's cabin area is built upon a dark grey 6 x 8 baseplate, and consists of a yellow steering wheel, a transparent windscreen and rear window, and a dark green roof with two transparent orange lights on top. The roof is only held on by two studs so that it can be easily removed. The engine area at the back of the steamroller consists mainly of lime green pieces with a yellow strip in the middle for the engine casing, while the engine itself which can be seen in an area not covered by the lime green bricks is represented by using light grey parts. On the back of the engine are four black grille pieces, representing vents. Positioned on top of the engine is a black Technic tube which is used as an exhaust. Behind the engine is a grey tow bar, whilst two purple wheels with white round plates and purple printing are attached below it by grey Technic pegs so they can spin freely. Below each side of the cabin are sets of yellow steps (with two steps each), while toward the front is perhaps the steamroller's most prominent feature. This is the steamroller's face, which uses red pieces for the mouth's lips and white for teeth. Attached below either side of the windscreen are grey clips with transparent studs, acting as eyes. At the front of the steamroller is a large drum, the part which is used for flattening things. This drum is made up of six spiked wheels- four orange and two dark grey. The drum is built on a black 16 stud long Technic axle, and is attached to a structure designed for holding the drum which is made mainly of black parts. The drum area is connected to the rest of the steamroller by Technic pieces underneath the cabin, which gives the drum the ability to turn left and right, and also slightly tilt from side to side. To each side of the drum is a laughing gas bomb, which features a printed face on the front front. The bombs are loaded into the round hole in grey Technic elements, which can be rotated 360º so the bombs can be fired from different angles. Since the bombs themselves use Technic axles, they are simply held in the hole by gravity so they can be easily flicked out. 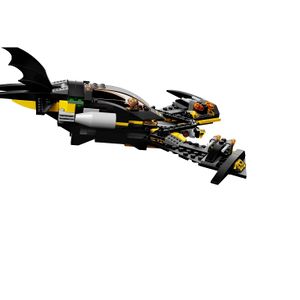 This version of the Batwing features a primarily black and yellow colour scheme. The cockpit, has has four studs allocated for seating a single minifigure, includes a 2 x 1 tile showing instruments which can be tilted up and down, and a brown chair built from several parts. The canopy is a transparent brown part which can be lowered up or down and clipped into place on the studs at the front. In front of the cockpit is a sticker featuring a black and yellow bat symbol. The Batwing has two grey engines, which are directly to either side of the cockpit. Above each engine, amongst a variety of other pieces, are three transparent 1 x 1 plates- transparent green above the right for starboard lights, and red above the left for the port ones. The tail section features black angled parts coming out at the sides, and two black sloped bricks, each built on yellow reverse sloping bricks, pointing to behind the aircraft. Situated between these tail features is a black wing. The Batwing's wings have the ability to be open like a standard plane, or rotated inwards and forward, due to each wing being connected to the rest of the plane by two dark grey hinge pieces. Each wing features two flick-fire missiles with transparent orange tips, and several transparent yellow lights. When a wing is pushed forward from its open position, it also moves the other wing in the same way (but mirrored) and moves a section slotted into the front of the plane forwards as well. This is due to Technic beam pieces which are attached to both wings and the middle section via pegs. On the outer part of the front of each wing are two plates with extra grooves on the end, which protrude slightly from the rest of the wing. Overall, it gives the play feature of allowing the plane to convert to "attack mode" so that when a wing is pushed forward and a minifigure is in front of it, the Batwing can grab the minifigure and carry it away. The Batwing does not feature any landing mechanism, but is built upon a stable base, and each wing has a transparent smooth dome underneath so that the wings can grab a minifigure while the Batwing is rested on a surface.

The set comes with a total of five minifigures. Batman is included in his black suit with a yellow utility belt and background for the bat symbol, and has a black cowl, batarang and cape styled like a bat's wings. Batman has a double-sided head, one featuring a neutral expression, and one with clenched teeth. The fifth Robin, Damian Wayne, appears for the first time as a minifigure, featuring a red Robin suit with a yellow utility belt and black and yellow Robin symbol, black arms, green hands and a black short leg piece. He also comes with a black hairpiece, black staff and a yellow short cape. Robin also has a double-sided face, each depicting him wearing a green mask, but with different expressions, one with clenched teeth, the other open-mouthed and surprised. Batgirl also makes her first minifigure appearance in this set, despite previously being featured as a microfigure. Like Batman, she comes dressed in a mainly black suit and is armed with a black batarang. However, she has gold hands, and a gold bat symbol and utility belt printed on her body, along with some silver areas. She also has some purple and lavender printing, matching her cape, which is in the same style as Batman's. On top of her head, Batgirl has a combination cowl and red hair piece, a new mould designed for her. Like the other heroes in this set, Batgirl has two expressions- one smiling whilst the other is angry.

The two villains in this set have both appeared in the past, but feature brand new variants. The Joker is dressed in a purple fedora and suit with a blue vest, orange shirt and lime green bow-tie. To match his skin tone, the Joker's hands and head are white, and his face features a crazed grin. He comes armed with a black gun with a flag coming out of the end of it which says "BANG!" on each side, through the use of two of the three stickers included in the set. The Joker's goon is dressed in construction gear, complete with yellow hard-hat and orange vest, whilst wearing a white and green shirt and purple pants. The back of the vest, meant to read "construction", has been altered with white paint to read "destruction", with "The Joker" written in matching white paint above it. The goon, featuring an angry expression, comes armed with a red crowbar.

Batman's archenemy, the Joker, is again attacking Gotham City, this time in a steamroller and assisted by one of his henchmen. However, Batman responds to the crisis in an attempt to save the city, piloting his Batwing, along with help from two members of the Batman Family, Batgirl and his son Damian Wayne, fulfilling his role as Robin.

This is a description taken from LEGO.com. Please do not modify it. (visit this item's product page) Capture The Joker and his goon to stop a steam roller rampage!
The Joker and his goon are causing havoc in Gotham City with their crazy steam roller and are destroying everything in their path. Batgirl and Robin need backup from Batman™ in his fast and heavily armed Batwing to end this crime wave. Use the Batwing’s 4 flick missiles to disable the rampaging steam roller and then switch the wings to attack mode and grab the bad guys before they can launch the laughing gas bombs! Can Batman™ and his fellow heroes save Gotham City? Includes 5 minifigures with assorted weapons: Batman™, Batgirl, Robin, The Joker and Joker goon.