The set features minfigures; Frank Rock and Ann Lee (The Monster Fighters) and three glow in the dark Ghosts (The Monsters). The set contains a black train decorated with bones and dragon wings, manned by three Ghosts, and a red plane with four flick-fire missiles for the two Monster Fighters.

This vehicle contains many glow in the dark elements, the most of any monster fighters LEGO set so far (20 pieces). It also the primary vehicle in the set. On the front of the train engine there is a black cow-catcher, two lime-green 1x1 circular studs representing headlights and a rounded glow in the dark piece with a new printing of a ghastly face. Above that, there is the Ghost Train engines circular 4x4 radius funnel in the middle of it stands a transparent large green flame that glows in the dark.

Most of the ghost train engine body is made up of boiler which is made from a series of black circular bricks including a few white circular plate pieces and is at about the same width as the top of the train engines funnel. Beside the boiler sticks out black tail-like pieces (commonly used as tails on large LEGO monsters) with a white horn pieces extending from its sides and front which connects to the boiler on TECHNIC pins. Above the boiler, near the engines cabin sits a bell simply represented by a golden 2x2 dome top piece. At the top of the engines cabin is one of the moon stones with a printing of a ghost on it. The Cabin is able to fit one Minifigure, inside the Cabin there is a red lever with a black control stick piece right above an opening Engines fire place with several Transparent-Orange LEGO pieces inside. The Ghost Train engines also bares wheels underneath made from proper RC train wheel pieces, unlike the carriages.

There are also three carriages that are apart of the Ghost Train. Two of them are where a Ghost rides in, these carriages are decorated in a variety of LEGO skeletal pieces. Even having a bone piece as a handle bar for the Ghost minifigures to hold on to. On its sides it has black wings (typically used on the old LEGO Dragons), two of these wings also have the function to move up and down when you move the Ghost Train by the wheels. They have at the bottom a thin TECHNIC wheels used as the carriage wheels which also have a black thin rubber piece used to represent it as a tyre to allow the carriages to be easily pulled along the ground by the Ghost Train.

The Prison carriage is quite spacious for a minifigure. The prison cages are made from bone pieces and on the top of the the carriage it has bone/teeth pieces stinking out too, giving it a more sinister look. Virtually the only details the prison carriage shares in common with the other two smaller carriages is having the same wheels.

There is no "main" function of the Ghost Train, however it has multiple play features including two flapping wings, an opening furnace (in the Train engines cabin), and a small prison for the ghosts to keep their hostages in. 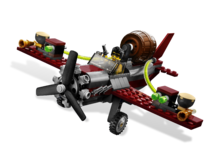 The Monster Fighters airplane is more the subsidiary vehicle in the set. It comes with a colour scheme of dark red and grey. In most of the picture debuts, it has Frank Rock piloting the vehicle along with Ann Lee holding on to an attachable chain at the bottom of the airplane.

On the top of the airplanes tail it has a large brown LEGO barrel which leads out with two flexible lime-green cords which attach to the airplanes wings. The airplanes wings have two flick-firing missiles on each side and a telescope piece most likely used as a gun of some sort at the end of the wings. The plane also has two wheel legs at the bottom for landing made mostly from TECHNIC pieces.

Monster fighters, Frank Rock and Ann Lee, attempt to get the Ghost Moonstone from the haunted Ghost Train located in the area of the Monster Realm known as The Moor of Woe and Wailing before Lord Vampyre does.

This is a description taken from LEGO.com. Please do not modify it. (visit this item's product page) Stop the Ghost Train in its tracks and grab the moonstone!

The Ghost Train is getting away with the moonstone. Help Frank Rock and Ann Lee catch it in their acrobatic airplane, suck up the ghosts with the vacuum weapon and grab the moonstone! Don't let them trap the heroes in the Ghost Train's prison! Includes 5 minifigures: Frank Rock, Ann Lee and 3 ghosts.