Crunket is a minifigure that appears in the Legends of Chima TV Series. She is the wife of King Crominus[1] and the mother of Cragger and Crooler.

Crunket has lime green scales and dark green claws. She wears a torn strapless pink dress with red highlights. A Chi harness necklace hangs around her neck and a gold crown sits atop her head.

Crunket was born into the crocodile royal family and met the lion prince Lavertus at a young age. The two fell in love, yet Lavertus was soon exiled for stealing Chi, and she eventually married Crominus instead. ("This May Sting a Bit")

During a battle versus the lions, King Crominus and Queen Crunket fell down into a giant sinkhole inside their tank, causing Cragger to accuse the Lion tribe of being behind this and declared war. Laval and ShadoWind rescued her and the Crocodile Legend Beast from a web trap in the Outlands. She told the tribes of Chima she and Crominus survived and what became of them. The Gorge of Eternal Depth has a gravity field that broke their fall. The caves lead to the Outlands. The tribes in the Outlands seek to steal all Chi and they only blocked the Chi falls. These tribes trapped the Legend Beasts and King Crominus.

Prior to the heroes departure into the Outlands, Crunket released Crooler from the dungeon and met up with them and Lagravis near the Outlands edge. She explained to them the creation of the Crawlers and how she had escaped before presenting Cragger with one of Crominus' weapons, pleading for her son to bring him home. 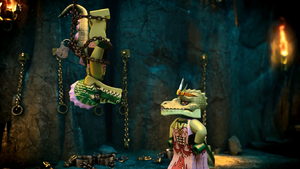 With the tied-up Crooler

The next day, Crunket sent Crooler to interrogate the spider prisoners. However when she herself went down to the dungeon to check on her a while later, Crunket found that the spiders had escaped and tied up Crooler, who explained that they captured Plovar and took him with them to fix their queen's tooth. ("The Legend Thief")

Following the defeat of the Crawlers, she and Crominus returned to the Crocodile Swamp. On the day that the Hunters arrived, Crunket and Crominus were inspecting the troops and were frozen before they were able to react. Their frozen blocks were taken to the Hunter's fortress and displayed in Sir Fangar's trophy room. ("Attack of the Ice Clan")

Crunket was eventually unfrozen by the phoenix child Flinx during a rescue mission launched by the Chima heroes. She and Crominus were reunited with Cragger until Flinx unfroze the captured Crawlers. Still enraged at them for what they did, Crunket fought Spinlyn barehanded until the melting fortress forced them to to retreat. ("A Very Slippery Slope")

Crunket was present at the map room when Eglor gave his report to Laval in the map room concerning the lack of Hunter sightings. ("The Artifact")