Davy Jones is a Pirates of the Caribbean minifigure who appears in the video game LEGO Pirates of the Carribean: The Video Game and the set 4184 The Black Pearl. He is the part octopus, part crab, and part human, captain of the Flying Dutchman and a main antagonist in Dead Man's Chest and At World's End.

Davy Jones was a Scottish sailor who fell in love with the sea goddess Calypso. She offered him command of the Flying Dutchman, to save dying sailors at sea and to transport them to the next world. She said that they would spend one day together on land for every ten years of service, but broke her promise. Angered and heartbroken, Jones carved his heart out, put it in a chest, and hid it on Isla Cruces. He then turned the pirate Brethren against Calypso and set out to remove her from the world forever, planning to take command of the sea.

He cursed the Flying Dutchman by transfiguring the dying sailors into half-fish, half-man creatures who would eventually completely lose their humanity and become a part of the ship itself. He also a deal with Jack Sparrow that Jack would captain the Black Pearl for 13 years, then become part of the crew of the Flying Dutchman. 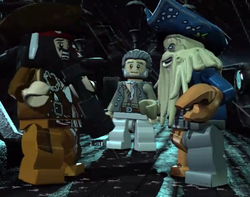 When Jack Sparrow's time ran up and a black Spot appeared on Jack's hand, he tried to avoid his fate by finding the Dead Man's Chest, which held Jones' heart, to use it as leverage against jim. Jack took his crew to Tia Dalma to locate the Flying Dutchman, hoping to find the key to the chest with them. They were sent to a ship wreck, where Jack sent Will Turner to get the key. Jack told Will that if he were to get into trouble, just say that Jack sent him to settle his debt, telling him that it just might save his life. Will agreed and went aboard the vessel.

While aboard the ship, the Flying Dutchman surfaced, and Davy Jones captured Will and the survivors of the wreck. Jones realized that Will was "neither dead nor dieing." Jones asked Will what his purpose was, to which Will responded, "Jack Sparrow sent me to settle his debt." Jones laughed saying "I'm sorely tempted to accept that offer." Jones looked over and saw Jack looking at him through a spyglass. When Jack put down the spyglass, Jones appeared right in front of him. Jack attempted to haggle his way out, asking if he could give another soul in his place. Jones said that it would cost him 100 souls to escape the deal, including Will's.

Jack tells him that Will, whom Jones has already captured, is betrothed, hoping that this might tip the scales in his favour. To this Jones replies simply, "99 souls." Jones then removes the Black spot from Jack's hand and tells him that he has three days to collect the 99 souls. While aboard the Dutchman, Will is reunited with his father, William "Bootstrap Bill" Turner. Later on Will becomes interested in Liar's Dice. Bootstrap explains the rules of Liar's Dice to Will and tells him that anyone can challenge anyone. So, Will challenges Davy Jones. Jones accepts and the stakes are set, Will's eternal soul for Jones' key to the Dead Man's Chest. 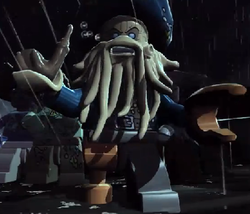 Jones reveals the hiding place of the key, held by one of the hidden tentacles in his "beard." Fearing for his son's life, "Boot Strap" enters the game, betting his soul as well. Bootstrap loses, and Jones wins his soul. Will is told that he is allowed to leave, the next time they make port. Will then tells his father that the game was never about winning or losing, just about finding the key. That night, Will slips into the captains quarters, steals the key, and escapes the Dutchman. Will finds safety on a small merchant ship. When Jones awakes, he discovers that Will has stolen his key. He then commands his loyal "pet" the Kraken to destroy the merchant ship. Will manages to escape, and makes his way to Isla Cruces, the location of the Dead Man's Chest.

Jones realizes that Jack Sparrow has been behind this the whole time, and makes his way to Isla Cruces as well, hoping to beat Jack to the chest. Unable to go ashore, he sends his crew to retrieve the chest for him. the crew manages to return the chest to Jones. By this time, Jack's time is up. So Jones sends the Kraken to drag the Black Pearl to Davy Jones' Locker, and Jack with it. After the Kraken has done so, he demands that the chest be opened, so that he can see his heart with his own eyes. When he opens the chest, Jones discovers that his heart is gone, having been stolen by Norrington, who traded it to Lord Cutler Beckett. With the heart as leverage, Beckett now controls Jones, and therefore, the Dutchman, and the crew. 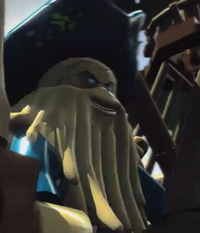 In At World's End, Cutler Beckett hopes to bring an end to piracy by commanding Jones to destroy all pirate ships. By doing so, Beckett has almost complete control of the seas. To prove to Jones that he is his master, Beckett commands Jones to kill his beloved Kraken. Jones is devastated. Beckett continues to search for the Brethren Court, planning to crush it, thus bringing an end to piracy. When the crew of the Black Pearl return from Davy Jones' locker, Beckett commands Jones to follow Sao Feng's ship, the Empress. That evening, Jones attacks the Empress, killing Sao Feng. He then takes the crew, including Elizabeth Swann, as prisoners and locks them in the brig of the Dutchman, towing the Empress behind.

Admiral James Norrington, feeling guilty for his past actions, frees Elizabeth and the crew, and helps them back to the Empress. Bootstrap discovers them and sounds the alarm. Norrington then shoots the line between the Dutchman and the Empress, letting the prisoners escape to safety. Bootstrap then stabs Norrington through the chest. Jones comes to the scene and asks Norrington if he fears death. In response, Norrington stabs Jones through the chest before his death. Jones takes that as a no, and takes Norrington's sword. At the news of the Admiral's death, Ian Mercer, Beckett's right-hand man takes control of the Dutchman.

Later, Will Turner comes aboard the Endeavour, and has tea with Beckett. Beckett summons Jones. Will tells Jones that Jack Sparrow is alive. Jones is furious with Beckett for not telling him. Will then tells Jones of the plan to release Calypso. Jones is stricken with emotion, which turns to anger. Jones reveals his relationship with Calypso and that it was he who taught the Brethren Court how to bind her in human form. He says that Calypso must be prevented from being released. Will Makes a deal with Beckett to free his father and let Elizabeth go free in exchange for showing them the way to Shipwreck Cove, the lair of the Brethren Court.

Jones says that he will except only one payment, Calypso murdered. Jones then teleports to the brig of the Black Pearl, where he finds Calypso in her human form as Tia Dalma. The two talk and before Jones leaves, Jones tells Calypso that his heart will always belong to her. When they arrive at Shipwreck Cove, parley is held on a small sandbar between Jones, Will, Beckett, and Jack, Barbossa, and Elizabeth. Beckett tells them that if they do battle, all of them will die, but Elizabeth refuses to surrender. But before they leave, they trade Jack for Will. But before Jack leaves, Barbossa takes Jack's piece of eight. They then go their separate ways. 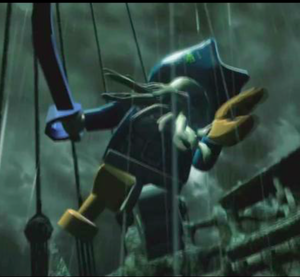 Davy Jones after his heart was stabbed by Will Turner

Barbossa later burns the nine pieces of eight and frees Calypso. Before she turns into her true form, Will reveals to her that it was Jones that first told the Brethren Court how to bind her. Angered with Jones, Calypso creates a Maelstrom that traps the Black Pearl and the Dutchman within. During the battle, Jack escapes the brig and steals the chest holding Jones Heart. When Jones finds him, the two duel on the mast of the Dutchman. Will then duels with Jones, and in the ensuing battle Jones knocks Will to the floor.

Jack then distracts Jones by threatening to kill him, holding the remnants of his sword in one hand and Jones heart in the other. Jones then stabs Will through the heart. and after gets attacked by a no-longer-insane Bootstrap. Jack helps the almost lifeless body of Will to stab Jones' heart. With his dying breath Jones whispers, "Calypso" before falling off the side and into the Maelstrom. In his death, Will Turner was made captain on the Dutchman, and the remaining crew of the Dutchman had their humanity returned to them and were allowed to move on to the next world.

This is a description taken from LEGO.com. Please do not modify it. (visit this item's product page) Davy Jones is undead captain of the Flying Dutchman, bound to service on the Seven Seas ferrying the souls of lost sailors into the afterlife. With the power of the Kraken at his cruel command, Captain Davy Jones will strike fear into the plastic heart of any minifigure that dares to cross his path.