Ice Monsters are Rock Raider minifigures. They are similar to Rock Monsters, except that they are white. They too feast on crystals, and can be found in the icy sections beneath Planet U. They are more aggressive than rock monsters, and fight with Lava Monsters, their natural enemies. In a prototype image of one of the Rock Raiders sets, it showed a Rock Monster, except that it was white. This could have been an Ice Monster, or it could simply have been an unpainted prototype. 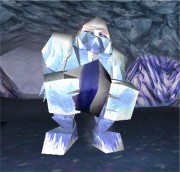 An Ice Monster holding a boulder.

An Ice Monster named The Berg was the boss of the Arctic circuits of the video game LEGO Racers 2. This is the first known intelligent monster, and builds upon the theory in High Adventure, Deep Underground that the monsters once were a civilization.