LEGO Star Wars: Revenge of the Brick is a LEGO-brick mini-movie spoof loosely based on Star Wars Episode III: Revenge of the Sith. Revenge of the Brick premiered on the Cartoon Network on Sunday, May 8th, 2005, at 7:00 p.m. EST. The mini-movie now can be seen in QuickTime format on the LEGO website or directly downloaded. It was also released with the Clone Wars Volume 2 DVD as one of its special features. The film also appeared on October 2, 2005, at the 2005 Woodstock Film Festival, in the "Animation for Kids" category.

It was produced by Treehouse Animation, which has since collaborated again with LEGO on producing Batman mini-movies similar to it. The mini-movie now can be seen in QuickTime on the LEGO site or directly downloaded here. A "making-of" narrated by Mark Hamill can also be viewed on the site.

Mark Hamill, who played Luke Skywalker in the Original Trilogy of Star Wars films, was involved in the creation of this project. According to Hamill, "as the original Luke Skywalker, I think I know something about making Star Wars movies. So the fit with Treehouse [Animations] made perfect sense."

The video begins with an opening sequence taking place outside Kashyyyk. Two craft appear. The camera then switches to the Trade Federation droid control ship from The Phantom Menace. Inside is Count Dooku using a remote to show General Grievous, sitting on his chair and getting up. The sequence shifts to the battle in space, as enemy ships appear.

The view shifts to Anakin Skywalker's craft (an ARC-170 starfighter), copiloted by a clone trooper and a clone rear gunner. Anakin turns left and the ship goes upside down and the camera shows Anakin and a scared clone pilot flying down the trench to engage the enemy fighters, a reference to Star Wars Episode IV: A New Hope. A droid tri-fighter fires on Anakin, but misses. Anakin goes away and the two flanking fighters explode from friendly fire.

Another enemy fighter aims at Anakin's craft and fires an orb, which hits his ship. Out of the orb comes a maniacal buzz droid, and attaches itself to the ARC fighter. The rear gunner uses buzz spray to repel it, but the droid gets close to Anakin's window. Anakin presses a little blue button activating the windshield wipers to get rid of the pestering machine. The buzz droid avoids them and attaches itself to the fighter's starboard engine, and begins to cut into it. 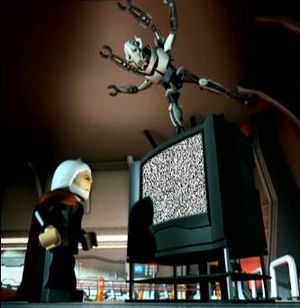 General Grievous on top of a television set

Count Dooku is watching a TV screen but gets only static. General Grievous acts as an antenna on top of the television. Dooku points his finger at Grievous to at the exact position that shows a clear picture of the battle outside. The movie then shifts to another sequence. Obi-Wan Kenobi's Jedi interceptor flies into view as a vulture droid fighter fires two missiles at Obi-Wan. Obi-Wan uses the Force to disassemble his starfighter into separate bricks to avoid the missiles. The projectiles hit two other vultures instead.

The camera shifts to Anakin. Turbolasers from the control ship shatters Anakin's ARC fighter. Anakin exits the remains of the craft, floating in space. He rebuilds his fighter with the Force. Realizing that he created a useless bi-plane, he demolishes the plane and rebuilds it again in a speeder-like fighter. One of the clones is onboard as well. (There is no sign of the other who probably smashed.) Anakin then uses the Force to control the buzz droid to cut an opening into the Trade Federation droid control ship. Inside the flagship, droidekas fire at Anakin from a platform, trying to stop his advance. Anakin uses his lightsaber to destroy the platform the droidekas are standing on, while the clone trooper desperately clings to the side of the fighter.

The sequence shifts back to Obi-Wan's craft. A tri-fighter fires on Obi-Wan and takes out his starboard wing. Obi-Wan uses his Force powers to demolish the enemy craft. Obi-Wan then pulverizes another tri-fighter and two vultures. He then uses the pieces to remodel his fighter into a Y-wing. Obi-Wan advances on the control ship and destroys some of communications devices the on top. The sequence shifts to Anakin leaving the flagship, clone trooper still clinging to the side. The flagship explodes. Anakin and Obi-Wan then proceed to Kashyyyk (which bears a strong resemblense to Earth).

On Kashyyyk, Yoda spots some battle droids. The droids also notice him and surround him. Yoda disassembles several droids with the Force, mixing their parts in the process. Yoda then brandishes his lightsaber and destroys more droids. A Heavy Assault Vehicle/wheeled A6 Juggernaut|Turbo Tank arrives with Mace Windu and clone troopers. The Wookiees join the clone army in the fight with Chewbacca leading them. Anakin and Obi-Wan soon arrive and join the battle. 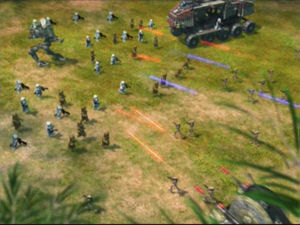 The two armies fight to the last brick.

The clone troopers and Wookiees keep fighting valiantly. A Clone AT-RT is destroyed in battle. Chewbacca is attacked by a Confederate tank droid and is almost run over. He assembles a rocket launcher from shattered bricks just in time to fire a rocket just as the tank turned around to run over him. The damaged vehicle skids to a stop near him, and he faints from the shock of it.

Almost all the clones and Wookiees have been neutralized. Anakin, Obi-Wan, Yoda, Mace and Chewbacca are the only ones left, and are surrounded by battle droids. One of the droids says "Uh oh" when Wookiees reinforcements arrive in a Wookiee Catamaran and destroy the droids. They drop missiles and destroy many droids and tanks, forcing the droid army to retreat.

The next sequence begins with the bar scene reminiscent to the Mos Eisley Cantina scene in A New Hope. Everyone is here (Grievous is the bartender, apparently having quit his general job.). Ponda Baba and some Jawas are present, and although you only get a fleeting glimpse of him, so is Count Dooku and a Droideka. Yoda (R2-D2 rolls past Yoda) uses the Force to steal the drinks R2-D2 is carrying on a tray attached to his back. Mace, Obi-Wan and Anakin are at the bar. Chewbacca takes a picture of Anakin and Obi-Wan. Chewbacca sees the picture of Darth Vader and Ben Kenobi in a lightsaber battle (reference to A New Hope) instead of Anakin and Obi-Wan standing together, happily. Chewbacca collapses. Greedo is standing behind him, and watches him fall. The mini-movie ends. The end credits roll as Darth Vader uses his lightsaber as a baton in conducting a clone trooper orchestra, which is playing the Imperial March.

The mini-movie is basically a very tongue-in-cheek look at the important happenings of Star Wars Episode III: Revenge of the Sith, and is presented in a 3-D computer animation format, as is Treehouse's specialty.

The spoof features stylized versions of the LEGO Star Wars Episode III building toys in fantasy situations, portraying the interactivity of LEGO in various hilarious scenes. LEGO classic mini-figures are also made more 3-D in their detail, with more flexibility in movement portrayed to facilitated the film's action sequences.(i.e sqash and stach.)

In addition to its TV airing and release on the internet, the short film was released on a promo disc in Europe, and was released on the DVD for Clone Wars Volume I on December 6, 2005 for the rest of the world. It was also included on the "Bonus DVD" enclosed in Trends International LLC's: "The Art of Star Wars: A 16-Month 2008 Wall Calendar." 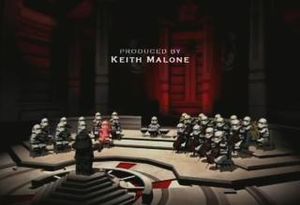