3061 City Park Café is a Friends-themed set released in 2012. It includes Andrea, Marie, a café, and many accessories.

The café is built on light blue baseplates. There is a small outdoor seating area in the front of the café. There is a lime flowerpot in the out left hand corner of the seating area. To the sides of the flower pot are two white fences that pronounce the edge of the baseplate and extend four studs before they end at pink columns with red ornaments. Near the pink columns at the front is a white stool with red padding for seating at a table. The table is rounded and has a white base and red tabletop, to match the stool. On top of the table is a printed 1x1 brick with a picture of an orange with an orange 1x1 slope on top to depict a carton of orange juice. There is another red and white stool to the lower right of the table. 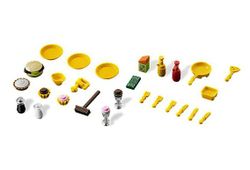 The exterior of the café is of a rounded pink, white, and red building. In front of the outdoor table is a lime section with a flowerbed. Behind the flowerbed is a large transparent window. To the right of the window is the front door. The door has a white frame and the inside is also transparent. Both to the right of the door and to the left of the window are transparent, curved panels with curved, red bricks below them. The two curved windows are nearly identical, except the one to the left of the flowerbed-window has a large sticker of a pink milkshake and the one on the right has a red gumball machine with yellow, blue, and lime studs for gumballs. Around the corner of the sticker-less curved window is another transparent, similar to the one with the flowerbed, except this one is thinner and a brick shorter. Below this window is a line of pink bricks which extend to the end of the baseplate. Below the pink bricks is a line of red bricks, which also extend to the end of the baseplate. Next to the thinner transparent window is a red clip with a broom with a white column on top which extends upward to the roof of the café. There is no wall on the left side of the café, around the milkshake-window's corner. Like most LEGO playsets, the back is open for play.

In the front and centre of the café's roof is a white and pink sign with red lettering which reads "Café" in red letters with a red coffee mug below. The sign is surrounded with blue and pink neon lights. Extending from the sign on both sides is a pattern of curved bricks alternating between pink and red until the areas above the curved windows are reached when there are large, red corner curves which take up more than straight ones. Around the corners on both sides, the pink/red pattern is dropped and smaller pink curves are used instead. The roof is only for decoration and does not cover the inside. 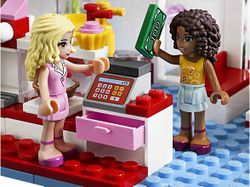 The interior of the café has red and white table similar to the one in the outdoor sitting area to the left side of the door with condiments such as salt, pepper, ketchup, and mustard. To the right of the door is a booth which has a long, white seat with red padding to the left side of the door. In front of the long seat is a matching white/red table with a yellow plate that has a sandwich on it. To the right of the table is another long red/white seat. Behind the condiment table is a white counter with what seems to be an ice-cream machine with choices for brown and pink coloured flavours with a white lever and black nozzle. The ice-cream machine is turned so that the nozzle and lever are facing the back of the café. To the right of the ice cream machine (still on the counter) is a transparent display case for the included pie and with brown and pink cupcakes (in yellow cases) on top of the case. Continuing right, the counter has a pink drawer with a red and white cash register above. The floor behind the counter isn't blue like the rest of the set, but red. To the right of the café (on the side where there is not wall) is a kitchen. The kitchen starts with a long, white sink (with red trim and a black nozzle) that has various yellow utensils (such as forks and knives) inside. An egg beater is placed next to the sink's nozzle. Next to the sink is a white stove with a large, yellow saucepan and spatula on top.

Andrea has dark skin and curly dark brown hair. She has dark green eyes. She wears a yellow shirt decorated with music notes and bubbles, an aqua skirt, and magenta shoes.

Marie has Emma's hair in blonde and with light nougat skin. She has amber eyes. Marie wears a pink waitress shirt and matching pink skirt. Her shoes are a darker pink than her outfit.

The City Park Café is where Andrea has a part time job. It is one of her favourite places to hang out. Marie is the owner of the building and inherited it from her mother. The café was a favourite hangout of the girls and they would meet there after school and on the weekends. The café has only been mentioned since 2013 as after the set was discontinued, sets like 41035 Heartlake Juice Bar and 41119 Heartlake Cupcake Café replaced it as the girl's meet up place.

The café briefly appears in the beginning of New Girl in Town, it shows Andrea performing in front of customers instead of serving them. When the hyper Scarlett rushes into the café she bumps into Andrea, which causes her to drop a burger on a customer's head. It's hinted that Andrea was fired afterwards as the café and Andrea's part time job are not mentioned or seen again.

In LEGO Friends: The Video Game[edit]

The City Park Café is located in Marina Beach, unlike in other depictions where it's in the heart of Main Street. In Andrea's story you fill in for Andrea at work and take over her shift at the café. You make and deliver food and drink for and to customers. After you play three levels of this you move on with the story. You can go back to the café at anytime to play the game.

This is a description taken from LEGO.com. Please do not modify it. (visit this item's product page) Build a hip hangout for the LEGO® Friends with a side of fresh-baked fun!

49.000 원</div></div>ink=]] 49.000 원
+
Released
2012 +
SetType
Regular sets +
ShopDescription
Build a hip hangout for the LEGO® Frien … Build a hip hangout for the LEGO® Friends with a side of fresh-baked fun!</br></br>Andrea works at the City Park Café and loves dishing out tasty treats, when she is not singing into her broom and daydreaming of her big performance. It’s the perfect place in Heartlake City for all of the LEGO® Friends to meet for milkshakes and burgers or to chill and have fun! You can bake goodies for the girls in the café kitchen, complete with everything you need to serve up café cuisine in style! Then hang in the outdoor dining area and have a milkshake in the sun! Order up a sweet snack, serve the customers and pay with LEGO money bricks! Includes 2 mini-doll figures: Andrea and Marie.</br>*Includes 2 mini-doll figures: Andrea and Marie</br>*Features kitchen area, inside and outside dining areas, counter and cash register</br>*Accessories include LEGO® money bricks, frying pan, spatula, 3 muffin tins, mixer, utensils, baking tray, bowl, pie and juice carton</br>*Make tasty treats for your friends in the café kitchen!</br>*Meet up after school and hang in the outdoor dining area!</br>*Cash out the customers with LEGO money bricks and a register!</br>*Rebuild and create new places to play!</br>*LEGO® Friends pieces are fully compatible with all LEGO bricks</br>*Collect all of the LEGO Friends sets for a whole world of LEGO Friends fun!</br>*LEGO mini-dolls are LEGO minifigures made especially for the world of LEGO Friends with thousands of customizable hair and fashion combinations</br>*Measures over 4” (11cm) tall, 7” (19cm) wide and 7” (19cm) longm) tall, 7” (19cm) wide and 7” (19cm) long +
Theme
Friends +
Title
City Park Café +
Txt1
Marie +
Txt2
Andrea +
Type
Set +
USPrice
$34.99 +