4206 Recycling Truck is a City set released in 2012. It contains 297 pieces to build a recycling truck, several recycling bins, a forklift, and three minifigures. 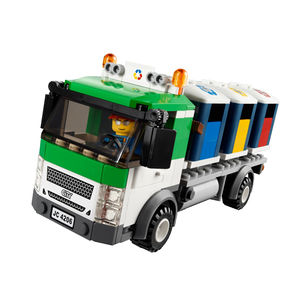 Another view of the recycling truck.

The set comprises several models, including a recycling truck, several recycling bins on a storage rack, and a mini forklift. The recycling truck contains a bright green colour-scheme, and consists of a cab and a flatbed on which to place the recycling containers. Space for a minifigure to be seated inside is included, as is a pair of rearview mirrors and a steering wheel. In the front is featured a piece with a sticker reading "CITY", as well as grille decorations. A license plate is featured underneath. Atop the cab is placed two orange warning lights, as well as a pair of signal horns.

The recycling bins are all built similarly, but with slightly different colour-scheme. A red-themed bin is indicated to be used only for glass bottles, a yellow one only for aluminium cans, and a blue one for papers. The bins all have a small opening in the front, through which residents of LEGO City may place their recyclables in the appropriate bin. Signs on top of the containers also indicate which bin is for which substance. The bins are all placed on top of a large, flat grey model, which serves as a holder. A small green bin is placed behind the large bins, and is assumedly for other garbage. Two tan fences are places on either side of the bins.

The second minifigure is that of a driver for the recycling truck. He features orange pants, a blue shirt, and a red cap. His shirt features printing including elements suggestive of a recycling worker's garb, including orange overalls and a blue turtleneck sweater. His overalls contain a pocket, inside which is placed a pen. His face includes printing which suggests a smiling mouth and silver sunglasses over his eyes.

The third minifigure is that of a driver for the forklift. He features dark tan pants, an orange shirt, and a blue cap. His shirt contains printing suggesting elements such as high-visibility reflective tape, pockets, a blue turtleneck undershirt, a zipper, and a pen inside one of his pockets. His face includes printing suggesting a smirking, determined face, with a smirking mouth, dimples, and creased eyes.

Also included in the set is a red wheelbarrow, a black shovel, a brown broom, and several pieces of recycling to place inside the recycling bins.

Recycling is where certain materials, such as paper, can be combined and turned into a new product. This means that fresh materials can be used for other purposes, and results in less pollution and energy usage. People can come to recycling drop-off centres to put their recyclable materials into large bins. At set times, or when the bins are full, forklifts load them onto recycling trucks, and the recycling trucks then take them to recycling plants.

This is a description taken from LEGO.com. Please do not modify it. (visit this item's product page) Keep the streets clean with the Recycling Truck!

The citizens of LEGO® City love to recycle! Put the trash into the colored bins, lift them onto the Recycling Truck with the forklift and whisk them off to the recycling plant. Includes 3 minifigures: 2 workers and a female citizen who loves to recycle!