Tim Courtney (born February 27, 1980) is a community manager at the LEGO Group responsible for LEGO Ideas. 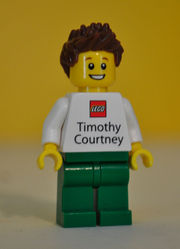 Tim Courtney grew up in Chicago, Illinois, United States. In 1999, Tim collaborated with LDraw users to create LDraw.org, establishing a single site for LDraw users and developers to communicate on. Tim co-authored the book Virtual LEGO, the official LDraw guide to building virtual models and using LDraw, in 2003. Tim served on LDraw's steering committee from 2004 to 2005.[1] In 2005, he graduated from North Central College in Chicago with a bachelor's degree in organizational communication. After working in different jobs in marketing, Tim was hired by the LEGO Group in 2011 to help develop the experimental crowdsourcing platform LEGO was testing, then known as LEGO CUUSOO. On April 30, 2014, LEGO CUUSOO was taken down and became LEGO Ideas.

Outside of LEGO, Tim is an avid pilot, having been interested in flying since the age of 5. Tim currently resides in Connecticut, United States.