10210 Imperial Flagship is a Pirates set released in January 2010. It contains a three-masted sailing ship of the Imperial faction from the Pirates theme, and includes nine minifigures. It is the last known Pirates set released for the time being. It was only sold in LEGO brand stores and at LEGO Shop at Home.

This ship is the first completely square-rigged three-masted Pirates-styled sailing ship, and also the biggest, measuring 29.5” (75 cm) long and 23.6” (60 cm) tall, outsizing what was previously the largest pirate ship to date, 6286 Skull's Eye Schooner. The ship is armed with four cannons that can be allocated to eight cannon hatches (four on each side). They are rolled across the floor on wheels, with rows of bricks on either side preventing them from sliding away from the cannon-port. Over each cannon port is a blue flap, which can be lifted. Its hull houses a brig behind the bow, a galley at the aft and the aforementioned artillery in between. The ships superstructure is divided into two separately detachable segments to allow easy access to the hull's interior, since its completely covered by the main deck. Previous ships had open hulls. One segment comprises the two foremost masts fixed to a part of the main deck with a large latticed hatch at its centre. The second segment comprises the stern castle that houses the captain's quarters, and the aft-most mast which has another latticed hatch in front of it. The front of the ship has a single flag, and a saw shark as decoration. 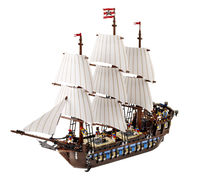 Two doors lead into captain's quarters that contain a commode, a telescope on a stand, a chest and an organ. It is entirely inside, with a door leading to the main deck of the ship. The map is on a table, with a crystal stand right next to it. There is an organ in the back, but the set does not come with an organist. There are 6 windows, with two in the back at a constant angle. These can be opened and closed. There is also a small balcony behind the room, but with no open doors, the minifigure who was there would have to jump down from above to get onto it. In addition to all of this is a treasure chest. The interior can be accessed by removing its roof which is also the quarter deck with the helm station. Beneath the stern-castle is the galley, which contains a fireplace where a chicken is spit roasted, as well as various pieces of equipment, such as frying pans and knives. For food, it contains a roasting chicken, a carrot, another part representing a carrot slice, and two fish. The roasting chicken can be rotated rotisserie style. Above the captain's quarters is the place from which the ship is steered. It uses skeleton legs and rods to create a balcony effect. It has a steering wheel, a sextant, and a golden telescope. In the back of the ship is a rudder and 3 lamps.

Directly behind the bow is the brig, which also contains the ship's fully functional anchor winch. The vertical winch can be operated from the deck above. The brig itself is usually hidden beneath the first detachable deck segment and has a brick-built door that leads to the artillery deck. It also contains a bench on which a captive minifigure can be placed. The artillery section takes up the whole space between the brig and the galley. It contains four cannons, two crates with ammunition (ten round 1x1 bricks total), 2 muskets, and two torches with flames. The artillery room can be accessed by either opening the large hatches or detaching the deck segments. The main deck is very large, making use of large plates and TECHNIC parts. From it "sprout" the masts, each with their rigging attached to this level. The sections of this deck, along with the masts attached to them, can be removed (and so can the captains quarters) for a detailed view inside of the interior.

The crew comprises four soldiers with shakos, an officer and the ship’s captain who looks similar to the Imperial Governor from 6242 Soldiers' Fort. Other minifigures are the captain's daughter and a captive Captain Brickbeard.

This is a description taken from LEGO.com. Please do not modify it. (visit this item's product page) Build an incredible classic sailing ship!

All hands on deck! This amazingly detailed and realistic historical ship has three removable sections. The main hull contains 4 firing cannons, ammunition crates, muskets, torches, cannonballs, a prison with a rat, a fully-equipped ship’s kitchen, working anchor, moving rudder and a saw shark figurehead. The front deck has an opening door to the inside of the ship and sails with masts and rigging. The back house deck has opening doors to the captain’s chambers containing a map, poison bottle, organ and a treasure chest full of jewels and gold. The Imperial Flagship has 6 opening windows, a telescope and sextant and 3 deck lanterns. Includes 9 minifigures: the ship’s captain, his daughter, a pirate captain prisoner with shackles, the ship’s cook, a lieutenant, and 4 soldiers. Measures 29.5” (75 cm) long and 23.6” (60 cm) tall. Ages 14+. 1,664 pieces