The basic build of the body is the same as the other large battle machines, mainly using a SNOT technique. The body is built using a main "bar", which connects to the legs. Four TECHNIC pieces used as levers connect this bar and power core to the sides of the body, and can hinge up and down slightly. When the outer section is pulled downwards, the power core will light up and send the light down the fibre-optic cable it is connected to. There is an upright TECHNIC bar passing through the 'roof' which, when pushed downwards, will eject the light-up brick power core. 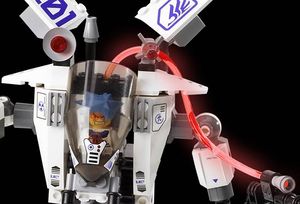 The top of the vehicle, with the power core lit up.

The roof is made of a black 2x8x1/3 with holes and a black 2x4x1/3, also with holes, which sits on top of the other piece. On the sides are small sloped pieces. Behind each of them is a stud, on which a black 1 x 2 Arch rests, also connecting onto the sloped brick. The missile and scanner dish sit on top of these. This results in three holes, one of which is empty. The power cord comes up through the centre hole, while the other contains the TECHNIC brick used to eject the power core. The sides of the body each have a sloped piece (1 x 6 Slope and 2 x 6 Slope). On each of these sits a light grey Grille.

The mech is equipped with a light-up brick and fibre-optic cable to "power up" with. The cable is connected to a sniper rifle-type device, in which it lights up from a small light grey cone. The double-sided sword is constructed from a TECHNIC piece and two Knight's Kingdom swords. For the plating, it has three small light grey pegs, connecting to a flat 1x8x1/3 and a trans-red stud. The Stealth Hunter is also armed with a missile, two more small guns on the cockpit, and a sonar-dish device.

The large "wings" at the top are fully mobile and can turn 360 degrees, although they may be blocked by the cable. They can also hinge up and down.

The arms and legs are built using the same types of pieces as the Knights' Kingdom II large knights, although the thigh pieces are shorter, having only 2x2 studs instead of 2x3. The ones from this set have dark grey base pieces with white joints.

The cockpit is fixed to the outer parts of the body, so it moves up and down slightly when the power core is turned on. The pilot stands upright, on the piece that allows the cockpit to hinge up and down. The cockpit has a black robot hand used for a joystick. It also has two small guns underneath the canopy, which is the same piece as used for many other sets, such as 7656 General Grievous' Starfighter and 7660 Naboo N-1 Starfighter and Vulture Droid.

Hikaru is included in his original 2006 suit. He has a thin mouth, with a small line underneath it. He has brown eyes with black eyebrows. The other side (the 'angry' side) has the same eyes, but a different mouth. Both sides have an orange mask extending over the top part of his head that can be seen underneath the hair, but with a gap in the middle for where the nose would go, if he had a nose. His hair is made of rubber, rather than the normal plastic. It is a light blue colour. His suit has white pieces, apart from the hips and hands, which are black. Only the torso has markings. It has a blue collar, and blue pads near his hands. On his right side, he has his symbol, and on the other side, the designation '.01'.

The Stealth Hunter was one of the first battle machines revealed in Exo-Force and was Hikaru's first battle machine. It went through many battles during the course of 2006. The Stealth Hunter was not actually a unique vehicle; it was mass produced, although Hikaru is the pilot most often associated with it. None of the other pilots were named and only one is shown. It's weapons are a laser rifle and a dual bladed electro-sword.

This is a description taken from LEGO.com. Please do not modify it. Defend against evil!

When the evil robots attack, Stealth Hunter is there to stop them! This battle machine strikes from the sky, protected by a stealth coating that makes it invisible to sensors. Armed with a laser rifle and a dual-blade electro sword, it is ready to defend humanity against invasion!

When the evil robots attack, Stealth Hunter is there to stop them! This battle machine strikes from the sky, protected by a stealth coating that makes it invisible to sensors. Armed with a laser rifle and a dual-blade electro sword, it is ready to defend humanity against invasion!