Sentai Fortress:
This set consists of twelve main parts. Eight of these; the gate, the towers, the four walls, and the hangar, make up the fortress. The last four are the four vehicles; the Silent Strike, the Bridge Walker, the Stealth Strike, and the Venom Walker.

The four walls are all similar; the only differences are the items attached to the top. In the setup shown on the box, the front right wall (from behind) has a disk launcher. The front left wall has both a bazooka gun and a missile, and, behind this, in the rear left, there is a transport cart with a seat and a box behind it. The fourth wall has a two-seater passenger cart atop it (a possible reason for this may be that the tower it connects to contains the medical bay). The walls themselves are 13 studs high, and each of them has one small rock piece in the centre. 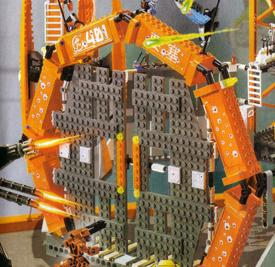 The frame of the gate is built out of six large orange bricks. The gates are hinged, and can open either out or in. Along the gate's front, from left to right, there are four symbols attached to it; Hikaru's, Takeshi's, Ha-Ya-To's, and Ryo's, respectively. The gate can be locked, although the lock can be forced with a large vehicle such as the Mobile Defense Tank, or the Robot Rammer X1 from 7705 Gate Assault.

The two towers are also quite similar. The medical tower has a bed in the centre level. A magnifying glass and a power cord shine a focused red light onto a minifigure seated there. On the top of it, a landing platform for the Stealth Strike, Ha-Ya-To's glider is located. The second features a weapons arsenal, with missiles and guns, located at the same level as the other tower's medical centre. The roof of the tower features a control centre, which features two seats, and two large bazookas positioned in it facing outwards. The transparent roof is hinged, and can move up and down. At the front of both of the towers, there are light grey ladders attached to the topmost level, although they do not appear to lead anywhere.

At the back of the building is the hangar bay. This mainly consists of two large orange gantries stood upright to form the walls, with a large yellow crane hung between them. Under this, there is a turbo fan such as used in the Fire Vulture and Sonic Phantom, attached to a bar. There are flip-down floors at half of the height of the hangar, both with a rack of tools attached. At the bottom, there is a structure which appears to be a refueling tank. Opposite it is a brick with a large flat area, showing a plan for the Silent Strike battle machine included in the set. There are two revolving pillars at the front of the hangar, showing four different symbols.

Battle Machines:
The four battle machines included in the set are the Silent Strike, the Venom I, the Venom Walker, and the Stealth Strike. 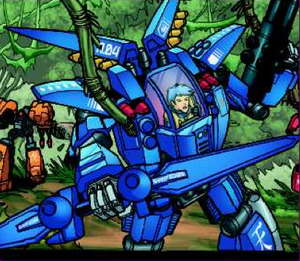 The Silent Strike (as seen in the comics).

The Venom I is designed very differently, and is built in such a way that the arms only have up-down rotation. It appears to have a large focus on guns and missiles, and not so much on the melee weapons, such as swords, hands, or saws.

The set also includes two small vehicles, one, a small glider piloted by Ha-Ya-To, called the Stealth Strike, that has missiles it's wings and, oddly, has legs. The other is a small walker known as the Venom Walker, with the body and arms of a silver Devastator. As it is a small walking robot-size creature, it is under debate whether it's a Battle Machine or a Robot, as it has the attributes of a Robot, but is almost as large as a small Battle Machine.

Minifigures:
The minifigures included are Sensei Keiken, Takeshi, Hikaru, Ryo, Ha-Ya-To, Meca One, and two Iron Drones. All normal minifigures (that is, humans) have reversible heads to display two expressions. This is the only set in the first wave that includes all of the regular human minifigures.

Sensei Keiken: Sensei Keiken wears white robes and a belt, has long, grey hair and moustache, green eyes, and scar across his face.
At the time the set was released, he was exclusive to it, although he later reappeared in the Hybrid Rescue Tank.

Takeshi: Takeshi wears red and grey armour, has green eyes and hair, and a scar on his face. Printed on his armour are four stars, and an image of Sentai Mountain.

Hikaru: Hikaru has white armour with blue accents, light blue hair, and orange tinting around his eyes. His armour has the number ".01", and an image of what appear to be wings printed on it. It is difficult to determine his eye colour because of the tinting.

Ryo: Ryo has blue eyes, purple hair, a red cloth covering his forehead, and orange and grey armour, which has "AT.01" printed on it.

Meca One: Meca One looks like a gold devastator, with black markings, particularly around the lower chest. His eyes are not coloured. Both Meca One and the Iron Drones are made of parts used almost exclusively to make them.

Iron Drones: The Iron Drones take the form of brown coloured, blank-eyed robots. Unlike Meca One, they have no secondary colouring.

Sentai Fortress, located at the end of Tenchii Bridge, was the primary base of the humans of Sentai mountain, lead by Sensei Keiken, in their battle against the robot army, lead by Meca One. The set features the robot army attacking the fortress and its defense by the members of Exo-Force.

This is a description taken from LEGO.com. Please do not modify it. (visit this item's product page) The battle for Sentai Fortress has begun!

The robot army has stormed Tenchii Bridge and is attacking Sentai Fortress! Can the humans fight them off and win the battle? You decide! This giant-sized EXO-FORCE battle set features a massive gate, two towers, human and robot battle machines, a repair bay, laser cannons, light-up elements, and much more! Get set for adventure as Hikaru, Takeshi, Ha-Ya-To, and Ryo fight the Iron Drones led by Meca One.