This article is about the Agents member. For the Alpha Team member, see Charge.

Agent Charge is an Agents minifigure introduced in 2008.

This variant is the same as the previous variant, but instead of having hair on his head, Charge has a silver helmet with a transparent yellow visor.

This variant is the same as the variant with hair; however, there is a dark stone grey piece between Charge's head and neck that represents body armour. 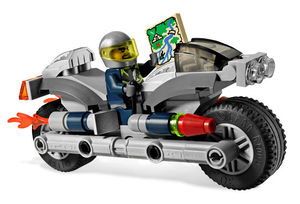 Agent Charge on his rocket-cycle with the treasure map

Agent Charge is a member of an elite team of crime-fighting not-so-secret-agents, the Agents, based in LEGO City. Doctor Inferno, an evil genius who tries to take over the world and bring the Agents to an end, rose up and created his own criminal organisation. One of Dr. Inferno's first known schemes was to send his henchman, Break Jaw, to set up a base in a swamp and search for a treasure map. Break Jaw eventually found the map, which led to a temple that was said to have dozens of gold bars stored in it. The Agents became aware of the plot and sent Agent Charge to recover the map. Charge succeeded in his mission, but Break Jaw got away with the location of the treasure. After several missions involving other agents, Dr. Inferno's location was finally revealed, and he was captured by Agent Chase, Agent Charge, Agent Fuse, and Agent Trace. Agent Charge then incarcerated Inferno in the Agents' Mobile Command Centre. However, Inferno's henchmen, Spy Clops and Gold Tooth, created a plan to break out Inferno. Spy Clops broke into the vehicle and freed Inferno. In the ensuing fight, the Agents, including Agent Charge, fought off the attackers. Agent Fuse, in his stealth plane, engaged in a dogfight with Gold Tooth, who was piloting a hover-jet. However, Fuse failed to stop him from escaping; Dr. Inferno stole an Agents jet-boat and escaped as well.

After escaping, Inferno sent Break Jaw and Slime Face on a mission to recover sunken treasure. After learning about Inferno's new plan, Agent Chase and Agent Charge went on a mission to recover the treasure chest first. After exiting the submarine piloted by Agent Charge, Chase was spotted by Slime Face. Break Jaw fired at the submarine, but missed. It is unknown what happened in the ensuing fight. Sometime after this mission, Dr. Inferno's base was destroyed.

Dr. Inferno, however, survived the destruction of his base. Sometime after that, Agent Chase, Agent Charge, and Agent Swift discovered the Magma Commander's secret base and his legion of remote-controlled Magma Drones. Using their new Aerial Defence Unit, they destroyed the satellite dish controlling the Magma Drones, neutralising the threat and saving the city once again.