Agent Fuse is an Agents minifigure introduced in 2008.

This variant is the same as the previous variant, but instead of having hair on his head, Fuse has a silver helmet with a transparent yellow visor.

This variant is the same as the variant with hair; however, there is a dark stone grey piece between Fuses' head and neck that represents body armour. 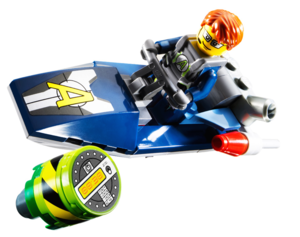 Fuse in the waterjet, next to one of Dyna-Mite's bombs

Agent Fuse is a member of an elite team of not-so-secret-agents, the Agents. The Agents are a crime-fighting organisation based in LEGO City, mostly operating there, but also internationally. Doctor Inferno, an evil genius who tries to take over the world and bring the Agents to an end, rose up and created his own criminal organisation. One of Dr. Inferno's first known schemes was to send Gold Tooth and his henchman to steal several gold bars from a jungle temple. Agent Fuse was dispatched to the jungle in his supersonic jet to deal with the criminals. After dodging stormy clouds and giant statues, Fuse homed in on the criminals' truck and fired a missile at it, blowing the gold off the truck. Gold Tooth and his henchman escaped, but Fuse successfully recovered the gold. After several missions involving other agents, Dr. Inferno's location was finally revealed, and he was captured by Agent Chase, Agent Charge, Agent Fuse, and Agent Trace. Inferno was imprisoned in the Agents' Mobile Command Centre. However, Inferno's henchmen, Spy Clops and Gold Tooth, created a plan to break out Inferno. Spy Clops broke into the vehicle and freed Inferno. In the ensuing fight, the Agents, including Agent Fuse, fought off the attackers. Fuse, in his stealth plane, engaged in a dogfight with Gold Tooth, who was piloting a hover-jet. However, Fuse failed to stop him from escaping; Dr. Inferno stole an Agents jet-boat and escaped as well.

Sometime later, the location of Dr. Inferno's secret base was discovered. Dr. Inferno had a giant laser cannon in the base, which he planned to use to take over the world. Agent Fuse went on a solo mission to infiltrate the base; but while relaying information to his fellow agents, he was overheard and captured by Claw-Dette. Agent Fuse was tied up and attached to a crane over a lava pit, slowly lowering him into it. Agent Chase and Agent Trace managed to break into the base which was being guarded by Fire-Arm and Claw-Dette. Agent Trace defeated Claw-Dette and saved Fuse's life. She also disabled the base's security system, allowing them to reach Inferno. However, Inferno escaped the base, which was destroyed by the Spy moments later.

Dr. Inferno managed to escape again, and hired more henchmen to carry out his schemes. One of these schemes was to send Dollar Bill and Dyna-Mite to rob the LEGO City Bank. Dyna-Mite blew the safe out of its place and the pair loaded it onto their speedboat. Agent Fuse, pursuing the pair in his waterjet, was tasked with stopping them. Dyna-Mite attempted to stop Fuse by dropping explosives in front of Fuses' watercraft. It is unknown if Fuse succeeded in his mission or not. 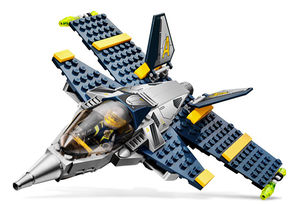 Fuse in the supersonic jet