Hey NXT, I've run into a bit of a coding problem (surprise! :P). I won't bug you with the specifics since you're probably busy building/fixing some thing way too complex for me to understand, basically I'm trying to get alternating rows working for the new infobox working. I can't use tr:nth-child stuff on common.css, because it needs the background:{{Background}} stuff you made for the original infobox, which only works inline (and likewise for common.js). So I was just wondering if you knew whether there was a way to code a template to get the row number of a table in an infobox? I don't think there is, but I just thought I'd see anyway. Thanks :) NovaHawk 07:53, 5 November 2013 (UTC)

Hmm, this is a certainly tricky one, because of the fact that some rows will not be filled in for all articles. I'll have a think. UltrasonicNXT (talk)

I haven't looked at the code and wouldn't know if this would work, so I'm speaking hypothetically, but could you "count" the number of rows in use somehow, like if |theme= has content, that becomes 1, |year has nothing so is skipped, |minifigures=3, so that becomes 2, etc. Then you could assign all odds as one colour, all evens as another. This sounds like something that would work more with a programming language than web-code though. CJC95 (talk) 16:41, 6 November 2013 (UTC)

Yeah. The easy way is to do it in javascript, however, we shouldn't really... A markup version, as CJC describes, would be incredibly complex once you have 10 rows in a table, though it would be possible. I haven't had any eureka ideas... UltrasonicNXT (talk)

Oh, I never thought of it like the way CJC's describing, it'll be a lot of if statements, but I could work on that sometime. And yeah, I was trying to avoid JS, but I looked into it when I couldn't see any other way, but then I realised I had no idea how to put

into JS without again having problems with actually getting the background colour required. Anyway, I'll get started on that big long template as soon as I can, thanks CJC :) NovaHawk 22:14, 6 November 2013 (UTC)

I know! We can embed that CSS into the template page, exactly as you put it there! There's a few ways of embedding CSS, and if we haven't got any (though I think we have) there's loads of extensions we could install. (if you wanted to to it JS, you'd have to give each element in the infobox both colour variants in a -data attribute, then the JS would go down the cells, picking either the first or second colour to use. UltrasonicNXT (talk)

Ooh, that'd be great :) I was dreading coding that template, if this is possible, it'd look much better as well. The only extension I can see that mentions CSS in Special:Version is the Gadgets extension NovaHawk 22:44, 7 November 2013 (UTC)

CSS looks a little better documented, but either would do. I'll install one later. UltrasonicNXT (talk)

Hmmm. Either way, I'd prefer not to allow anyone to add custom CSS whereever they like, but it's not as simple as just allowing it only in the template namespace, or only on specific pages, because then it won't transclude properly. I'm going to have to give it some more thought.

AbuseFilter created. It seems to work fine, and restricts adding the text "{{#css:" to admins only, but I don't have much experience with AbuseFilters, I think I've only ever made one other... NovaHawk 01:46, 22 November 2013 (UTC)

Good thinking, I didn't think of that. Do you want to implement it into {{Infobox}} or shall I? UltrasonicNXT (talk)

Hey, do you know when MediaWikiChat will be added to translatewiki.net, or has it already been added and I've missed it? --ToaMeiko (talk) 21:50, 9 January 2014 (UTC)

Well I, probably like you, am bored of waiting, so I'm going to approve the 'Preparation of adding to TWN' patch on gerrit, and hopefully this will encourage Siebrand/whoever to add it. UltrasonicNXT (talk)

That's been merged, if nothing happens in a few days I will bug someone about it :) UltrasonicNXT (talk)

Another thing, I saw people complaining about how the chat is in a wiki page and whatnot and how it loses space. Possible suggestion: Remove the left and right sidebar on Refreshed for Special:Chat so the chat page is the full width of the window. That way they still have user navigation and whatnot. Such a thing could either be a CSS gadget in user preferences or something done in MediaWiki:Refreshed.css/MediaWiki:Global.css. --ToaMeiko (talk) 20:20, 13 January 2014 (UTC)

Yeah, I talked with Drew earlier today about this. I did contemplate doing exactly what you describe. However, I am not too keen to implement something like this, as it would not be compatible with other skins, and I want to keep chat fully skin compatible, which it is at the moment. I think I may work on a fullscreen version, similar to wikia.s though. (As a note, I would much prefer to keep it as you describe and I was thinking, but I have not found a reliable, skin-compatible way to do this.) UltrasonicNXT (talk)

Ah, I see what you've done at dev, that's nice. We could do with removing the footer though. UltrasonicNXT (talk)

Yeah but it adds a pointless scrollbar, and is really not needed. Removing it would do no harm. If you really think it's needed, add a 'show footer' button or something, but it would really improve the UX to remove it... UltrasonicNXT (talk)

Hey NXT. I saw that GameGear360 created a few pages, which I would gladly manually import with their whole histories, but I think that you've said your bot can import them, so can you please do that for me? Thanks, Vasko (talk) 15:03, 31 January 2014 (UTC)

I would do, but it looks like CJC has beaten me to it! UltrasonicNXT (talk)

Hmm, that's odd. I could really do with converting them to the new template thingy though, so maybe I'll do that. UltrasonicNXT (talk)

Ah, we need to remove the 'toc' class of the table on them. UltrasonicNXT (talk)

Er, probably not :/ Anything above the PHP limit on the server is pointless, and the page does say getting up to 100 is pointless... I do need to sort something about those pages though, please bug me about it if I forget! UltrasonicNXT (talk)

I just tried to add in a placeholder list, not even considering it wouldn't work:

but I'm getting the same problem- I get hit by a blank page and nothing saves. As you can see, there's nothing Semantic about the template. So basically confirming what you already know- the problem doesn't seem to be loaclised to SMW, it's moreso just a "large page" thing :S (oh, and let me know if I start bugging you too much :P But that's all the testing I can think of doing anyway) NovaHawk 08:32, 13 February 2014 (UTC)

Ooh cor that is odd. (Gives me a tad of confidence in SMW though). I'll have to ask Lewis. UltrasonicNXT (talk)

While I support the message, it gets annoying when you have to dismiss it six times per session or whatever, whether or not you actually heed it. :P Is there a way where it could maybe be altered to appear a little less often after the first time, or only a certain number of times per session, or something like this? BrickfilmNut (talk) 01:22, 27 February 2014 (UTC)

Hey Ultrasonic! I saw a cool script you made for chat that pops up a message after a certain amount of messages submitted that suggests to edit some pages at the wiki. I thought it was really useful and I was wondering if I could use the script at the LEGO CUUSOO Wiki? Thanks, Codyn329 (talk) 01:31, 28 February 2014 (UTC)

Chat on a private wiki[edit]

Hello! Thanks for such a wonderful chat which can even keep a wikia addict to a private wiki. I recently installed it to our new private wiki as a final move from Microwiki (wikia). But problem is messages aren't displaying when you type. Neighter personal messages are working nor private. Strange thing is logs are working- http://micronationwiki.org/wiki/Special:Log/chat Just not displaying chat on the screen! I had seen this problem before here too but now chat seem to work here. What might be the cause of the problem? Aryavart (talk) 12:42, 7 March 2014 (UTC)

Yes I have followed all the instructions on Extension:MediaWikiChat page. I have used update.php script to create databases. I downloaded MediaWikiChat, moved it to extensions then added require_once( "$IP/extensions/MediaWikiChat/MediaWikiChat.php" ); to the LocalSettings.php and finally ran the update.php script. Was that all we need to do? Or there are some more steps? Aryavart (talk) 17:29, 7 March 2014 (UTC)

I uploaded a new avatar and it still thinks i'm using my old one... could you change it? (Clearing my cache doesn't work) —Unsigned comment by King Kahuka (talk • contribs).

Your feedback on "653 Flatbed Truck"[edit]

Thanks for posting your feedback on "653 Flatbed Truck".

What even are those image names..? I'm not even going to try...

Hey, I was wondering if it's possible to have a bot to go through articles and rename according to certain information? What I was thinking was to have a bot to crawl through the pages, search the value for "Project ID" parameter in the Project template, count the images, and then rename. Here's a link: ideas:Forum:File_Naming Thanks! ~ Codyn329 (talk) 14:07, 25 January 2015 (UTC)

The studs in Custom's Deepsea is gone due to your changes of how Deepsea works. Can you fix that? Also, can you help change my Meta personal Deepsea.css? Basically, I want it to look like Brickipedia but with a darker shade of blue. (

Okay, I'll get an admin to apply the fix. UltrasonicNXT (talk)

Will you be able to make coding for my personal .css for Meta that I described above? --Knight

Hey, Meiko motioned for me to talk to you about autoscroll not working on chat. 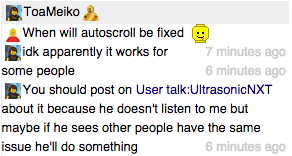 Do you know what the status is on it working?

Thank you in advance.

These are the errors I've been getting, don't know if that helps:

It could just be my outdated browser and all that could unrelated to autoscrolling though :P NovaHawk 01:30, 17 April 2015 (UTC)