DUPLO Land (formerly DUPLO Gardens) is the area of LEGOLAND Windsor between Traffic and Miniland, home to attractions for young kids. It is named and themed around the DUPLO toy-line. In 2013 it is to be extensively redesigned and contain a water park.[1] 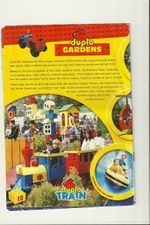 In May 1999, X-Treme Team (later renamed Extreme Team Challenge) opened.[5] In the early 2000s, the Waterworks were renovated.[6] For the 2007 season, the Whirly Birds were renamed to the Chopper Squadron. The models of small birds were replaced with an air traffic control theme.[5] Also introduced in this season, next to the Extreme Team Challenge, was the Mole in 1 Adventure Golf, at which, for an additional fee, visitors can play a round of miniature golf. The Pasta Patch was rebranded as Captain Barnacle's Boatshed, a fish and chip restaurant. In 2009 it was rebranded again to The Great British Carvery and later again a year later to DUPLO Family Restaurant.[7]

Chopper Squadron (until 2007 Whirlybirds or Whirly Birds) is a ride aimed at younger children.

The ride consists of several different coloured helicopters that rise up vertically and rotate. Two guests can be accommodated in each copter. The ride is controlled by the guests inside it, one stick controlling height and other rotation. To ride you need to be over 0.9m tall and if under 1.3m, accompanied by an adult.

This is a description taken from LEGOLAND Windsor. Do not modify it. (visit this item's product page) Everyone's big enough to be a pilot on the Chopper Squadron. Climb on and let the spinning propeller take you up and down and up again before you know it. Don't forget to take in the view!

DUPLO Playtown is a play area. It opened in 1996 and has been a consistent feature of the park since then, albeit with updates. It is set to be overhauled again in 2013.

It contains things to climbing frames, slides and other play-area attractions

This is a description taken from LEGOLAND Windsor. Do not modify it. (visit this item's product page) This is a designated soft surface play-area for younger children and their parents.

The DUPLO Theatre is a puppet theatre, showing fairy-tales with slight twists.

This is a description taken from LEGOLAND Windsor. Do not modify it. (visit this item's product page) These shows are for the whole family to enjoy

Make sure that you arrive 20 minutes before the show starts. Don’t forget to pick up a programme when you arrive in park with the daily show times as these times are subject to change.

These times are accurate at time of publishing. LEGOLAND Windsor Park Limited cannot be held responsible for any errors, subsequent alterations or inconveniences arising from them.

The DUPLO Train is a small train ride aimed at younger children. It travels around a small circular loop of track.

This is a description taken from LEGOLAND Windsor. Do not modify it. (visit this item's product page) A gentle ride around a short figure of eight track awaits young children who board this colourful train.

Extreme Team Challenge (formerly X-treme Team) is a water ride which consists of two teams of two going down the slides in a race.

This is a description taken from LEGOLAND Windsor. Do not modify it. (visit this item's product page) This exhilarating ride consists of teams of two people jumping on board an inflatable dinghy and racing down a waterslide at up to 35mph. Be warned, it is sure to be wet and wild!

Fairy Tale Brook is an attraction opened in March 1996. It is a boat ride throughout fairy-tale scenes, such as Hansel and Gretel, Little Red Riding Hood, Aladdin and The Three Billy Goats Gruff recreated in LEGO and animatronics. It is a WGH Transportation Engineering Water Ride.[5]

This is a description taken from LEGOLAND Windsor. Do not modify it. (visit this item's product page) A gentle boat trip for all the family. See Little Red Riding Hood and all your fairy tale favourites come to life through "LEGO MAGIC."

Mole In 1 Adventure Golf opened in 2007 and for an additional fee allows visitors to play a game of miniature golf.

It is believed that it was originally going to be called Wild Woods Golf, like the similar attraction at LEGOLAND California, as the original signs for the attraction stated.

This is a description taken from LEGOLAND Windsor. Do not modify it. (visit this item's product page) After splashing around in the DUPLO Waterworks, take a stroll up to the Mole In 1 golf course for a round of adventure golf with the LEGO woodland creatures. Fun for all the family, putt your way round our 18-hole course, and try to spot all the LEGO critters lurking in the lake or hiding under the bushes! Additional charge applies.

Waterworks is an attraction in the DUPLO Land area of LEGOLAND Windsor. It is a large outdoor water play area for young children. It was renovated in the early 2000s. It is set to be replaced by a proper water park for 2013.

This is a description taken from LEGOLAND Windsor. Do not modify it. (visit this item's product page) Here there is much to explore. There's a talking rhino, giant flowers, buttons to press, pads to stand on and of course plenty of water! You may need to pack swimsuits for the children as they're guaranteed to get wet!

The area contains a gift shop (Cuddles Corner) and two food-venues; DUPLO Family Restaurant (formerly Pasta Patch, Captain Barnacle's Boatshed, The Great British Carvery) and Fried Chicken Co.. The gift shop has gone through various interceptions, at times specialising in souvenirs and clothing. Currently, it is focused on soft toys as well as clothes. It was previously called LEGO Clothes 'n' Stuff.[8][9] The shop will be given a new colour scheme for 2013.[1] The restaurant was, from 1996 to 2007, Pasta Patch, selling pasta and pizza. In 2007, it was rebranded as Captain Barnacle's Boatshed, selling fish and chips. In 2009 it was renamed again to The Great British Carvery, before in 2010 being rebranded again as DUPLO Family Restaurant. Attached to the restaurant is a takeaway, which is currently branded as Fried Chicken Co. This is a brand also found at other Merlin Entertainments Group parks.[7]

The area is set to contain a massive upgrade for the 2013 season. It will most likely be renamed DUPLOVILLE, but it is still to be confirmed. Attractions will include DUPLO Water Fortress, DUPLOVILLE Playland, DUPLO Splash Zoo and a retail store. Fairytale Brook will remain, and the DUPLO Theatre will be renamed Storytime Stage.[1]

There will be two entrances to the area and each will contain an archway. There will be flowers and fence parts by the entrance and throughout the area. One side of the archway will be supported by a tree-trunk brick section, with normal DUPLO blocks on top. In front of this is a DUPLO dog model, which will be taken from the existing Waterworks attraction. The other side will be supported by a turret, based on the Castle and Princess themes. These will be designed to look as if a child has built them. On top of the supports, 4m above the ground to allow emergency vehicle access, is a banner connecting the two, and on top of that two flags, to add to the "fairy-tale" feel of the area.

A new dry play area is to replace the current DUPLO Playtown, on the location of what is currently Waterworks. It will be arranged like a small town and the ground will have a rubber crumb flooring and contain different colours and patterns to denote roads, pavements and gardens. It will include many different buildings, and will mainly be built around various Kompan play units.:

Next to it, near the existing retail building is a terraced seating area to allow parents to supervise their children.

The splash zoo and its models are based on the LEGOLAND California attraction. The zoo sign will spray water from the centre and from a geyser at the top. Animals are set to include a lion which sprays water out of its back and has a button operated spray from its mouth, a giraffe with a fountain on its back and a wheel operated spray from its mouth, a zebra with a continuous spray from its mane, penguins who sit on bricks which spray water out of the studs and a polar bear cub. The Elephant Tot's Pool will be a small paddling pool centred around an elephant which has a turning wheel which controls the water coming out of the trunk. Another tot pool based on a alligator, with a turning wheel that causes a jet of water to come out of the animal's mouth . There will also be a teetor-totter which sprays out water when children are using it and a place called Swabbies Deck, which will be pirate themed with flower squirter, swings and spray pads.

There will also be lockers and a changing area.

The splash fortress will be a large structure on what is currently Mole in 1 Adventure Golf. It will be based around a tropical/jungle theme, and various slides, play equipment and splash toys.

Built next to it will be a first aid and lifeguard kiosk. It will be DUPLO themed and continue a flag to set it out at a distance. It will also include a Q-Bot checking and staff information kiosk. 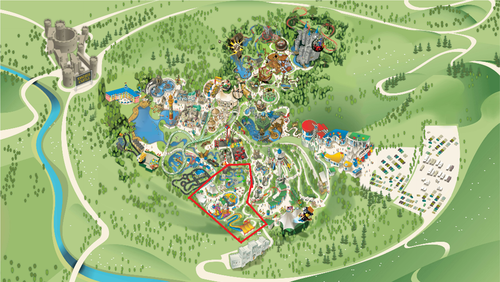 DUPLO Land shown in LEGOLAND Windsor as of 2012 (in red)