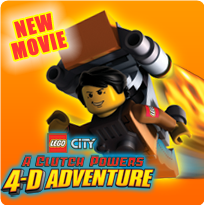 LEGO City: A Clutch Powers 4-D Adventure is a 4-D movie that was first shown in April 2010 at the Imagination Theatre in LEGOLAND Windsor and at LEGOLAND California. It is also currently shown in the LEGO Studios (Malaysia) 4D Theater in LEGOLAND Malaysia and in Legoland Billund Denmark (October 2012). It is approximately 12 minutes long.

Arthur Fol is expecting a special package with parts for a new machine, and he needs Clutch's team to go and pick it up. However, each team member wants to get the package back first so they can test Arthur's surprise machine. They each take different paths through the city to get the package, occasionally stealing it from each other. However they lose the box and are forced to fight the Crystal King, who is awakened after he is dug up in a construction site. The box is lodged in the Crystal King's shoulder spikes. The team bands together, puts the king on ice and recovers the package. They bring it to Arthur, who reveals that the parts inside are used to make a jetpack, which he puts on Clutch. Clutch accidentally picks up everyone else, and takes them for a ride.

Arthur Fol summons the Lego team who prides themselves in "building on each other". Arthur explains that he has a special package at the Lego City Airport which contains new parts for a machine with the expressed notion that it will take the "Lego team to new heights" and "anyone who gets the package gets to use it first". Consequently, it becomes a competition where each of the team members take a different path to the package, with Clutch in his car, Brick Masterson in a firetruck (with Sparky driving), Peg Mooring in the sky in a helicopter, and Bernie Von Beam on a bicycle. With all of the heroes going in the same direction, Clutch takes a shortcut. Clutch arrives first at the airport where he causes Kjeld Playwell (his boss), to fall and drop his brief cases while running through a revolving door. At the airport, he asks for the package where many are enamored with his celebrity status (including the a series of girls who try to chase him). While on his return, Clutch inadvertently goes down the wrong way on the highway and attracts the attention of Brick who steals the package from him while on the ladder of the fire truck. Sparky, however, comes to an abrupt stop and causes Brick to lose control of the package which ignites on fire in a hotdog stand. Eventually, Brick puts out the fire with the firehose in the fire truck. Meanwhile, Peg is watching all of this overhead and dives towards the package using an umbrella as a parachute. She steals the package from the firetruck and lands safely, but then is hit by Bernie on his bicycle. Bernie's time with the package is short lived while he descends quickly down a hill and ending up in a construction area with the package. In the construction area, the team awakens a Rock Monster with the box lodged in his shoulder spikes. Eventually the team realizes they need to work together and use each of their skills to turn the Rock Monster into a "Rocksicle". Clutch directs the team by using Peg's knowledge of the Rock Monster's core temperature, Brick gets a fan, and Bertie fetches ice. Meanwhile, Clutch modifies a construction vehicle that crushes the ice and uses the fan to blow the contents onto the Rock Monster. After the team successfully freezes the Rock Monster, Clutch is raised by a forklift and retrieves the package and tosses it to the team. After they bring the package back, Artie thanks the team for being "so careful with the package" and reveals the parts inside are to be used to make a rocket pack. Arthur fits the rocket pack on Clutch's back as a present for his bravery. While admiring Clutch flying, Artie flips a switch and causes the rocket pack to go into "Hyperdrive". This mode appears to be too much for Clutch, so the rest of the team tries to grab onto his legs to help him out. Instead, this causes for them to all be out of control with Brick holding onto Clutch's legs, Peg holding onto Brick's legs, and Bertie holding onto Peg's legs. The final scene is of Clutch and the team being "taken to new heights" flying off.