The main ride in Kingdom of the Pharaohs is Laser Raiders which is a dark ride where riders are in a themed car with laser guns. The aim is to shoot as many targets as possible during the ride. The ride features 10 backlit rooms, original music and lots of animatronics.

Scarab Bouncers is an indoor bouncing tower. There are two towers which are both 15 feet tall with carriages which travel up and down the towers at varying speeds. Each carriage can hold 7 people, there is only 1 designated seat for an adult (which is in the middle) with the others for children. Scarab Bouncers is in the Bazaar Tent. 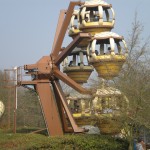 Aero Nomad is a traditional Ferris Wheel which offers views of Kingdom of the Pharaohs and some surrounding area.

Desert Chase is an Egyptian styled carousel for young children, the carriages on this ride range from a traditional horse to a Royal Carriage.

Thunder Blazer is a miniature chair-swing ride. Although smaller than it's neighbouring rides this still swings at a respectable speed.