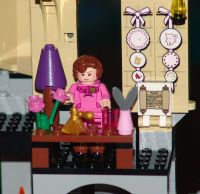 Professor Umbridge in her office, which appears in the 5378 Hogwarts Castle

The Umbridge minifigure consists of four parts. The leg piece is completely dark pink, and matches the primary colour of the torso piece. The torso piece has additional printing on it (in a darker pink and a black) to represent what Umbridge is portrayed to wear in the films and books. Also printed on the top left of the piece is a cat brooch. The head piece, like the hands on the torso piece, are flesh-coloured. The printing on the head piece depicts an unhappy-looking Umbridge, and uses pink, brown, light brown, black and white printing to represent this. Umbridge's hair piece is red-brown, and is used to give the image of short, curled hair. Included with the minifigure is one accessory, a transparent pink cup.

Umbridge appeared as a playable character in the video game, LEGO Harry Potter: Years 5-7. Her appearance is based on her physical minifigure, and is armed with a wand.

She also has a wizengamot variation.

Dolores Jane Umbridge was the Senior Undersecretary to the Minister for Magic. In Harry Potter's fifth year at Hogwarts, Umbridge was assigned as the school's new Defence Against the Dark Arts teacher by order of the Ministry. Umbridge taught Defence Against the Dark Arts from a purely theoretical view, something that at least the previous four teachers did not do. For this and a variety of other reasons, Umbridge grew to become a widely hated teacher in a short amount of time, by both staff and students. Due to further interfering by the Ministry at Hogwarts, Umbridge continued to gain further power at the school, such as being given the title of High Inquisitor, which allowed her to evaluate and sack teachers however she saw fit, and eventually, replaced Professor Dumbledore as Headmistress. 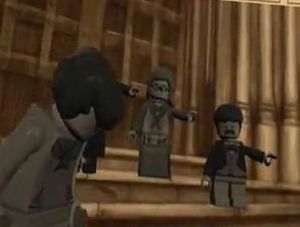 Soon after this appointment, Umbridge caught Harry Potter attempting to use the Floo Network. When Potter refused to tell her who he was trying to contact, she contemplated using the Cruciatus Curse, however before this could happen, Hermione Granger tricked Umbridge into going into the Forbidden with them, where she was attacked by a herd of centaurs after blatantly insulting them. After Lord Voldemort appeared in the Ministry of Magic and was seen by several people, including the Minister for Magic Cornelius Fudge, the Ministry agreed to stop interfering at Hogwarts, removed Umbridge from the school and reinstated Dumbledore as Headmaster.

Two years later, Umbridge came across one of Voldermort's horcruxes, a green locket that was once owned by Salazar Slytherin. Harry, Ron and Hermione infiltrated the Ministry of Magic to retrieve and destroy the locket using a Polyjuice potion. Umbridge was questioning muggle-borns in the courtrooms at the time. However, the trio soon located her and, after a brief skirmish, were able to escape with the locket.