Remus Lupin, also known as Professor Lupin, is a Harry Potter Minifigure introduced in 2004 where he appears prominently with sets based on The Prisoner of Azkaban and then redesigned for a final appearance in 2011.

In his first variation, Lupin wears a dark green suit which is torn in a few places, showing the lighter green shirt below. He wears a black tie around his neck and also has a grey cloak on his back. Lupin has combed over, ginger hair. His face has an inexpressive visage with a light mustache and two scratches across his face.

This is based on his appearance in Harry Potter and the Prisoner of Azkaban where the character debuts.

In 4756 Shrieking Shack, Lupin also has an interchangeable wolf head which fits over the normal minifigure head in place of the hairpiece. It is large and dark grey with no additional printing. All of the details, including a scowling brow, two eyes, a nose at the end of a snout, two ears, and fur sticking out.

For Lupin's next appearance, he has a less mangy, dark tan suit with a brown tie. He has the same hairstyle but has now grown a scraggly, brown beard with with neglected sideburns. Lupin is now smiling, has brown eyebrows, and his scars are less prominent, though they are still present.

This variation is based on his appearance in Harry Potter and the Deathly Hallows, the last two installments of the series.

Images in Standing Small: A Celebration of 30 Years of the LEGO Minifigure show an unreleased variation from 2004 where Lupin has the werewolf head and rather than a suit wears a green jacket and matching pants. A similar torso appeared in 4727 Aragog in the Dark Forest used on the Harry Potter minifigure, but it is in blue and has yellow printing on the exposed chest, rather than flesh.

Another variation that appears in Years 5-7 that is playable in story mode for Snape's occlumency lesson is a young version of Lupin. He has no facial hair and wears his Gryffindor robes. His abilities are unchanged. 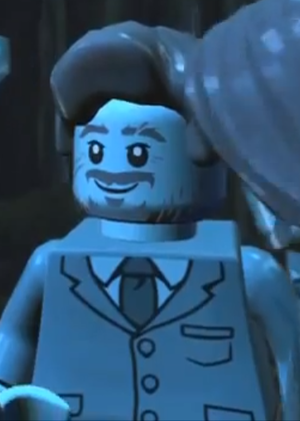 Lupin as a ghost

Lupin also appears as a ghost in Years 5-7, but this variation is not playable. It resembles his tan suit, but it has strong hues of light blue.

In both versions of the game Lupin is able to use the same spells as most other wizards, Reducto, Lumos/Lumos Solem, Wingardium Leviosa/Accio, Immobulus, Expecto Patronum, Expelliarmus, the Transfiguration spell, and any other spells purchased at Diagon Alley, in the first game while in the second he can perform Wingardium Leviosa, Diffindo, Lumos, Aguamenti, Expecto Patronum, and Reducto as well as any purchased in Diagon Alley.

In both games he can also transform into a werewolf which gives him his wolf head and replaces his spell wheel with new powers that include super strength and the ability to dig up dirt patches.

Lupin's roles in the games are the same as in the Harry Potter universe. He is playable in the story mode for the levels "News from Azkaban" and "The Shrieking Shack" in Years 1-4 and "A Not so Merry Christmas" in Years 5-7 as well as making several smaller appearances throughout both games' stories.

Remus John Lupin was turned into a werewolf when he was young by Fenrir Greyback. In school he befriended James Potter, Sirius Black, and Peter Pettigrew. They were known for being troublemakers. Lupin tried to hide the fact that he was a werewolf from them, but they realized the pattern in his disappearances and studied to become animaguses (wizards that can turn into animals at will) to be with him.

A young Severus Snape also discovered Lupin's secret when Sirius sent him to Lupin on a Full Moon, but he was rescued by James.

During the first Wizarding War, Lupin was a member of the original Order of the Phoenix. 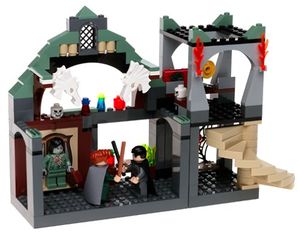 Lupin's classroom as depicted in set 4752

In Harry Potter's third year he was hired as a Defense Against the Dark Arts teacher at Hogwarts School. He was popular amongst most of the students as he was more adept for teaching than his predescessors, Quirinus Quirrell and Gilderoy Lockhart. He taught the students about Boggarts, Grindylows, and other magical creatures in addition to private lessons with Harry about Dementors.

During the same year, Sirius escaped from Azkaban because he was convicted for the murders of Peter Pettigrew and several muggles. Lupin struggled with whether or not to share this information with Dumbledore, but instead kept it to himself and conducted his own investigation, eventually discovering that Sirius was innocent and that Peter, who had been disguised as Ron Weasley's pet rat Scabbers had survived was to blame for the deaths. He joined Sirius in the Shrieking Shack when Sirius abducted Ron (and Scabbers who was with him). He tried to calm down Harry and Hermione and convince them that he was still on their side. Snape also entered the scene shortly thereafter intent on rescuing the trio, but Harry knocked him out to listen to Lupin and Sirius' explanation uninterrupted.

They revealed that Scabbers was in fact a disguised Peter Pettigrew and, as per Harry's decision, planned to take him back to the school to clear Sirius' name. However, Peter escaped in the chaos when Lupin transformed into a werewolf and Sirius took his dog form to keep him from hurting Harry, Ron, and Hermione.

Lupin left the school shortly after when Snape "accidentally" let it slip that he was a werewolf. 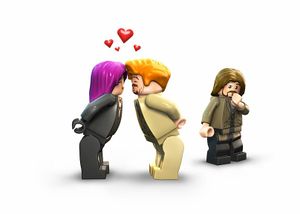 Lupin was a later member of the reformed Order of the Phoenix, and married Nymphadora Tonks who had he had a child with, Ted. He fought in the Battle of the Department of Mysteries, the Battle of the Astronomy Tower, and finally in the Battle of Hogwarts where he was killed by Antonin Dolohov and Tonks was murdered by Bellatrix Lestrange. Ted went to live with Tonks' mother.

Lupin's spirit was brought back along with Sirius, Lily, and James' by Harry brings with the Resurrection Stone and they comforted him as he went to surrender to Lord Voldemort.