Dementor is a minifigure from the Harry Potter theme, based on the creature of the same name from the books and films. To date, two variations of Dementors have been released. 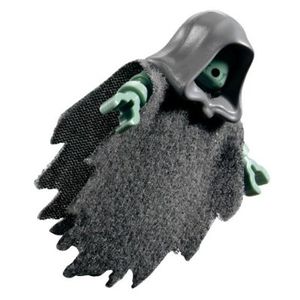 The Dementor has a sand green head, of which the only facial feature is a gaping, open mouth or hole, through which "The Dementor's Kiss" is delivered. On top of the head is a dark grey hood and underneath the head is a cloak of the same colour, ripped at the tips.

In 2010, a new version of the Dementors was made for 4842 Hogwarts Castle. The 2010 redesigned version is more detailed and instead of having light green skin, has a dark grey skeleton torso, and arms. Attached to the bottom of the torso is a light grey short rod with two clips at the top and space for a stud to fit underneath. Additionally, the Dementor has a double sided grey head with a more open mouth, a black hood, and a black cape ripped more at the bottom. 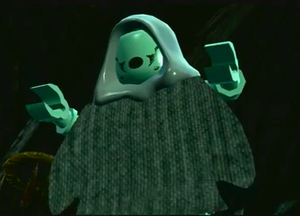 In both LEGO Harry Potter: Years 1-4 and LEGO Harry Potter: Years 5-7, Dementors appear mainly in their original design, with a light green skeleton torso and arms and a dark grey cloak and hood. However, they also appear with no cloak, a black hood, a grey skeleton torso, and a white shining face. In both games, Dementors appear as enemies and are non-playable. They can be defeated only by using the Patronus Charm, and when attacking can immobilise the player before damaging them.

Dementors are described as tall hooded figures in black cloaks, with scabby, clammy hands. They have rattling breaths, and seem to spread cold and negative emotions. Beneath their hoods, their face consists of more scabby skin, shallow indents where eyes would usually be and a single hole where a mouth would normally be. This hole is used to suck the soul out of a person. It is unknown what is underneath a Dementor's cloak, and it does not appear that there is any known way to kill them. However they can be repelled effectively with a Patronus Charm, which produces a silvery shield which guards against Dementor. Dementors are said to breed like fungi, in the cold, damp and dark. They are invisible to Muggles.

Dementors feed on happy thoughts and memories, and this is also how they move around, as they are blind. If given the chance, a Dementor will perform the 'Dementor's Kiss' on a person. This 'Kiss' is how the Dementors suck out someone's soul, leaving the victim as an empty shell, considered by many as being worse than death. This punishment seems to be the British wizarding equivalent of capital punishment.

Harry Potter first learned of Dementors in his third year. Sirius Black had escaped from Azkaban, and the Dementors were looking for him. Harry encountered one on the Hogwarts Express (causing him to listen to his mother and his father's last words before Lord Voldemort killed them 12 years earlier), and he fainted because the Dementor was particularly attracted to him because of his troubled past. Professor Lupin used a Patronus Charm to send it away. The Dementors had been posted at the gates of Hogwarts, and in the nearby village of Hogsmeade, in order to capture Black if he came near. Harry later learned of Black's innocence. Then he and Hermione found Black after a brutal fight with Lupin as a werewolf at the lake only to find more than a hundred Dementors had arrived to suck out Black's soul. Sirius immediately fainted, leaving Harry and Hermione to fight the Dementors. Harry tried to fight off the Dementors with the Patronous Charm, but Hermione soon fainted afterwards leaving Harry alone to fight the Dementors. Harry holds his own for a while, but eventually the Dementors overwhelm him. The Dementors are about to suck out Harry, Hermione, and Sirius's souls, when a mysterious stranger on the other side of the lake conjures a Patronous that sends all of the Dementors away. Harry believed the man who conjured it was his father and then Harry fainted as well. Harry then goes back in time with Hermione, and goes to see who conjured the Patronous that saved him, Hermione, and Sirius. When no one comes, he realizes that he was the mysterious stranger who cast the Patronous and sent the Dementors away. Harry then cast a fully fledged patronous (a patronous that has an animal form) and gets rid of more than a hundred Dementors which saved Sirius, Hermione, and his past self.

In Harry's fifth year, he and his muggle cousin Dudley Dursley, were attacked by two Dementors on their way home (only this time instead of Harry hearing his parents, he hears Voldemort when he tried to kill him in his fourth year). Harry managed to cast a Patronous and send the Dementors away, and takes a sickened Dudley home. He later learns that it was Dolores Umbridge who sent the Dementors after him.

In Harry Potter and the Half-Blood Prince, the Dementors have truly abandoned Azkaban and changed sides.

In Harry Potter and the Deathly Hallows, Voldemort brought his army of Dementors to the Battle of Hogwarts. The Dementors attempted to suck out Harry, Hermione and Ron's souls, however, Luna Lovegood, Seamus, Dean Thomas, and Ernie Macmillman saved them with fully fledged Patronous and encouraged Harry, Hermione, and Ron to cast their own Patronous to send all of the Dementors away.