Mia is a Friends figure introduced in 2012. She is one of the five main characters of the theme and one of the four deuteragonists of the television series LEGO Friends of Heartlake City, appearing in all nine episodes. She is the animal lover of the group of friends. She currently appears in twenty sets and she has seventeen variations between them. Mia also appears in thirty-seven of the forty-eight Friends webisodes.

Mia has variations all but one have the same hairpiece and all have the same headpiece. The headpiece's eye and freckle colour was initially amber in 2012 but was later changed to a light brown colour.

Mia has light nougat skin. Mia's eyes are currently light brown in colour. Above her eyes, she has curved black eyebrows. She has a smile, which is decorated with bright pink lipstick. Like all of the female mini-doll figures, Mia has a small rounded nose in the centre of her face. On each of her cheeks there's four rounded freckles. Mia has long dark red hair which is tied in a high ponytail. The hair has a fringe swept to the side and two strands falling down on each side. There is a hole at the top of her hairpiece, which is used to hold a bow or other accessories, like crowns and sunglasses. All but one of Miia's variants depict her with light nougat arms and hands.

In 3188 Heartlake Vet, 30101 Mia on skateboard, 3189 Heartlake Stables, 30108 Summer Picnic,Brickmaster Friends, and 41091 Mia's Sports Car she wears a medium blue halter top. There is a big light pink paw print in the bottom right corner, which is outlined in medium lavender. There are two purple butterflies printed higher up on the left side, which are also light pink and outlined in medium lavender. The top is combined with lime jeans with magenta butterflies printed on the bottom right side. She also wears medium lavender sandals. In 3189 Heartlake Stables, her hair can be changed to a black riding cap with her dark red hair tied in a low ponytail.

In 3939 Mia's Bedroom, she wears an aqua halter top with a bright pink clip around the string. The left side of Mia's torso has multiple light purple dots. The top and bottom left corners have a picture of a bright pink paw print. Mia wears the top with a light pink skirt and pink anklets and shoes. 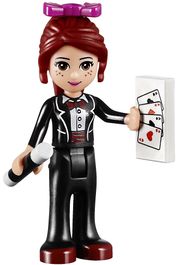 In 41001 Mia's Magic Show, she wears a black tuxedo. There is a dark red bow tie over a white shirt, that is buttoned up. At the bottom of her shirt is a large dark red cloth rapped around her weist. The jacket she wears is outlined in white. Mia also wears long black trousers and dark red shoes.

In 41015 Dolphin Cruiser she is wearing a lime top with white stripes. Printed on her torso at the right side are pictures in magenta of: a dolphin, a starfish, and seaweed. Mia wears a light blue skirt and white shoes.

In 41027 Mia's Lemonade Stand Mia is seen in an olive sleeveless top with a white brim around the neckline. There is a light pink flower that is outlined in white, printed on the left side. She sports a light pink layered skirt and white shoes. Her usual hairpiece can be changed into a magenta motorbike helmet.

In 41039 Sunshine Ranch, Mia wears a lavender strapped top. The right side of the top has dark blue flowers and stems, which are outlined in white. The top can be combined with lime jeans with bright reddish violet butterflies printed on the bottom right side. She also wears medium lavender sandals. Her hair can be changed to a black riding cap with her dark red hair tied in a low ponytail.

In 41059 Jungle Tree Sanctuary Mia is wearing a light lilac shirt, where at the top there is a white collar. Around her neck, she wears a magenta ascot. To the right of the ascot there is a magenta Jungle Rescue logo. At the bottom of Ma's torso, there is a black outlined pocket on the left and right side.

In 41040 Advent Calendar Mia is celebrating christmas in her winter gear. She wears a lavender sleeved jumper. The jumper is buttoned and tied around her neck she wears a light blue scarf. She wears long dark blue jeans with tan shoes.

In 41085 Animal Care Clinic Mia is in her vet uniform. Emma wears a medium azure buttoned shirt which is unbuttoned at the top, revealing her white undershirt. Her shirt has an earth blue rescue logo in the left top corner, and in the right top corner there is an earth blue outlined pocket.. She wears it with a magenta layered skirt with magenta and white trainers, tied with magenta laces.

In 41099 Heartlake Skate Park wearing a lime top with white stripes. Printed on her torso at the right side are pictures in magenta of: a dolphin, a starfish, and seaweed. wears earth blue trousers with earth blue and white trainers, tied with light royal blue laces. She still wears her sand green sneakers, tied with bright reddish violet laces with it. Instead of a ponytail in this set her headpiece is, a magenta riding cap with her dark red hair tied in a low ponytail.

In 41108 Heartlake Food Market she wears a bright reddish violet top. The left side is printed with a white heart and white swirls and earth blue swirls hearts. She once again wears her lime jeans with magenta butterflies printed on the bottom right side. She also wears medium lavender sandals.

Mia has fifteen different outfits in the theme's television episodes. In her regular variant, she is similar to her appearance from 3188 Heartlake Vet, 30101 Mia on skateboard, 3189 Heartlake Stables, and Brickmaster Friends except Mia wears a purple paw print in her hair. She also resembles a human more closely (apart from the hair, which still has a plastic like texture). In this representation, Mia has finger nails and a pointier nose.

Mia is one of the five main characters in the Friend theme. She is the animal lover of the group. Mia has four best friends, Andrea, Emma, Olivia and Stephanie. She is also friends with Andrew, Christina, Danielle Chloe, Danielle, Ella, Ewa, Kate, Katharina, Jacob, Joanna, Julian, Lily, Matthew, Maya, Noah, and Nicole. Mia owns a total of four pets; three dogs, Jacky, Scarlett, and Charlie, and a horse, Bella. According to the Ultimate Sticker Collection: LEGO Friends and Brickmaster Friends, Stephanie is her cousin.

Mia helps to take care of animals at the Heartlake Vet where she helps the veterinarian, Olivia's aunt Sophie to take care of them. Mia also plays drums and has a drum set in her bedroom. Mia goes exploring the ocean and looking for dolphins in 41015 Dolphin Cruiser. Mia appears to own Heartlake City's Bakery, where she bakes several different foods. Or she at least works there. Mia also likes sports, working outside, camping, canoeing and horse riding with Bella. According to her description from LEGO.com, Mia's a vegetarian and sandwiches and other vegetarian food is her favorite food. Also according to LEGO.com, Mia loves animals so much that she wouldn't dare to even squish a bug.

Mia's personality is kind hearted, she is also helpful as she gives Olivia tips on how to take care of her new foal.

Mia is going to enter the World Petacular Horseback riding competition against Lacy her arch rival, her new friend, Olivia helps her and in return Mia helps Olivia enter Scarlett in the dog competition. Mia loses the competition but dosn't care because she has four new best friends.

This is a description taken from LEGO.com. Please do not modify it. (visit this item's product page) About me
Favorite animal: My dogs, Jacky and Scarlett, and my horse, Bella.

My friends think I’m sometimes: Not listening to what they say.

I want to be: A vet! Or an animal psychologist, or run a pet rescue center.

I would never: Squish a bug or throw garbage in nature.

I like to hang out: At the Heartlake City Vet Clinic, and anywhere that I can take care of animals.