10224 Town Hall is an Exclusives Modular Buildings set that was released on March 1, 2012. It includes eight brand new minifigures. It is more expensive than the traditional US $149.99, which is standard for Modulars. This is the tallest Modular Building released so far, and the only one that is recommended for ages 14+, and is, so far, the eleventh largest set by piece count released to date. It was designed by Astrid Graabæk.

The Town Hall is a large building with three stories and a roof. The main composition of the bottom floor's exterior colour is light grey. The first and second floors are coloured dark orange on the outside, and the roof is mainly grey. However, on the upper stories, the floor only covers about half of the level. Hence, there is a wide-open view of auditorium in the hall, the ground floor is completely visible until the roof. The floors are connected by a working elevator.

The exterior of the ground floor features a small visible bit of sidewalk before the actual building is reached. On either end of the sidewalk are potted plants and a street-lamp. The first part of the building that can be reached is the façade. It is as tall as the entire ground floor, and features four large columns mounted on the stairs leading up to the building. These columns support the upper part of the façade, which has a large indentation in it with several decorations including four skeletal legs, presumably meant to be miniature columns, and the shield of the Modular Buildings series with a croissant piece on each side. Beside the columns is a window set into the building. Directly above those is a section of the wall not made of regular smooth bricks, but rather of textured dark grey ones. 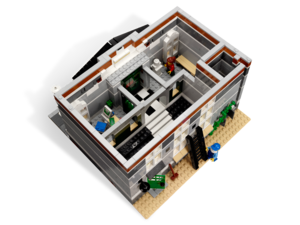 The bottom floor from above

The building can be entered by moving up the smooth tan stairs, and entering through a medium-sized green double-door which is attached onto the door frame by hinge and hook pieces. Behind the door is a hallway, tiled in black and white, which enters into the building's auditorium. This hallway also has a doorway to either side of it, each leading into a different room. The door on the left opens into a sparely-furnished grey room, the only adornments of which are a tan bench, and a white column with a white minifigure head atop it. From this room, one can either look out through the leftmost of the exterior windows mentioned earlier, or look through a small arched window into the auditorium. This is the only room on the first floor that has access to the elevator, and the door to it is found on the far left.

The door to the right leads into a much more crowded room, the tax office. It is furnished with a potted plant, a desk with a computer mounted on it, and a blue stool. Like the left room, from here you can look out on the street or the auditorium, although here there are two arched windows instead of one. 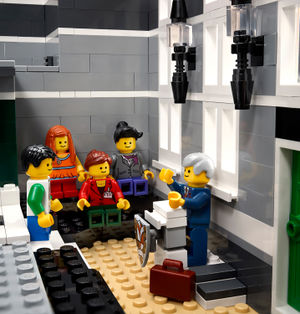 The auditorium can be accessed by going down the stairs that lead from the hall, and is a large, mostly empty room. At the end of the auditorium is a podium, which has steps leading up to it from either side. Attached to the podium's front is the same shield that decorates the front of the building. Around the podium, directly in front of the auditorium's walls on every side, is a long black double-tiered bench. Above the podium on the back wall are two lanterns, and next to these, situated periodically throughout the back wall, are three large windows. The back wall also sports a door that can be used to access the back of the building.

The building's back is fairly sparse. The green door from the auditorium opens onto a four-stud long backlot, with little to relieve the monotony, save for some ivy growing on the building's left side, and the auditorium's windows, one of which is higher and smaller than the others. The elevator shaft is visible from the back, as there is a slight stud offset with the rest of the building, causing a small gap to appear in the wall. 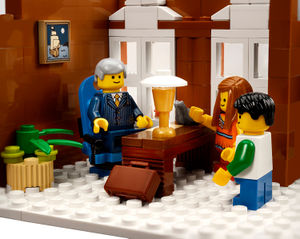 The first floor consists of only two rooms, an exterior balcony, and the elevator shaft. It is mainly coloured dark orange. The largest room on the floor would appear to be some sort of waiting room, and is furnished with a carpet, a desk with a potted plant atop it, and a chair. The room has two windows, both on the right side, next to the balcony door. The room can only be accessed from the mayor's room, the balcony, and the elevator, into which the room features a door. At the back side of the room, between the elevator shaft and the mayor's room, is a railing, which allows anyone in the room to overlook the auditorium one floor below. At the far side of the floor, beyond the gap which allows auditorium viewing and at the building's back wall, are three small windows. Each of the windows features a small tan ledge jutting out from it on the outside. 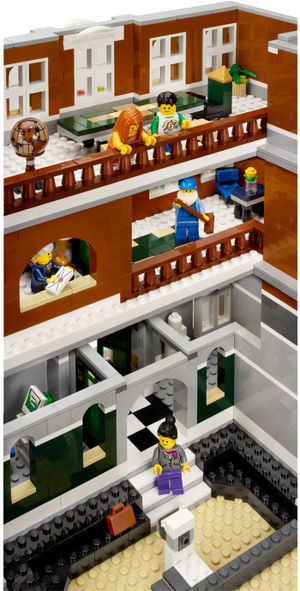 The second of the room's three doors is transparent, and leads out onto the balcony. The balcony juts out from the rest of the building, and is small, only able to fit about two minifigures. It can only be seen from out here that all he windows on this level have window-boxes with flowers attached to them.

The mayor's office is a comfortable room that is furnished with a desk, a chair, a potted plant, a picture depicting a sailing ship mounted on the wall, and, on the desk, a lamp and a frog-shaped paperweight. Two large windows look out of the room.

The second floor consists merely of a single large room, and, of course, the elevator shaft. The single room takes up over half the space on the floor, the rest of it being taken up by the elevator and the open space allowing viewing of the auditorium. The colouration of this room, like that of the one below it, is white floor, and dark orange walls, with only the lowest bricks being grey. Since most of the floor is one room, the railing cutting off the room from the drop into the ground floor stretches uninterrupted from the elevator shaft to the right wall. On the front wall of the room, two to the left and two to the right, are four windows, each of which look out on the street below. In between the two sets of windows is one larger one and the only one to have a window-box. On the far left and far right sides of the room are two potted plants, one on each end. In the centre of the room is a large green-and-tan table, surrounded on the left and right are three chairs, with one larger chair at it's head. In the right corner of the room, next to the railing, is a globe of the Earth. 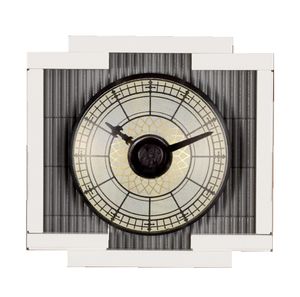 The roof is mostly grey, except for a tower of dark orange at it's front, into which a clock is mounted by a SNOT brick into a back of textured grey bricks. On top of the orange part of the tower is a slanted black section, followed by four small white pillars, which support the tower's conical roof. Along the back of the roof is a skylight, through which one can look down into the building below, and, more specifically, down into the auditorium on the ground floor. Next to the skylight is a small hatch that can be used to access the elevator shaft, presumably to service it. At the very front of the roof is a single stone railing, onto which is mounted the number 1891. The roof also includes a ladder which the janitor uses to clean the bell.

The set includes 8 minifigures: a bride, a groom, a janitor, the mayor, a news woman, a secretary, a female child, and a male child. Like most other Modular Buildings, all the minifigures have the basic smiley face.

The bride has an unprinted white slope piece in place of regular legs, standing in for a dress. Her torso is printed with the top of that dress, and a silver necklace, her hands are yellow and she has braided brown hair.

The groom has unprinted black legs, a black torso printed with a blue tie and a white collar, white arms, and yellow hands and he wears a black top-hat.

The janitor has light unprinted blue legs, a blue torso with a pocket and pencil printed on it. The janitor also has a beard piece also used by the Lawn Gnome and the Fisherman. He also comes with a blue cap and a broom.

The press woman has unprinted dark green legs, a red torso printed with a red suit, yellow hands and brown hair tied back in a bun.

The secretary has unprinted purple legs, a dark grey torso printed with a coat and a purple scarf, yellow hands, and curly black hair.

The female child has unprinted short red legs, a torso printed with an orange dress and flowers, yellow arms and hands, and long orange hair.

The set depicts a classic town hall from the early 1900s. At the town hall there is a couple being married, and the press arriving to monitor the event.

The back of the box

The box art is quite similar to that used by the other Modular Buildings, with a design of blue studs with the LEGO logo atop it printed across the top of the box. directly below the LEGO logo is a grey area that displays the set's age range, piece count, and number. Below that are two boxes with small image in them, one showing how the building can be taken apart, the other showing it's height and width. The main area of the box is taken up with a large image of the town hall, with he included minifigures arrayed around it. Superimposed over a small section of that is a image showing the building's back. The back of the box also shows the LEGO logo and the set's number, as well as a wall of small images showing various features of the set, and a large image of the set next to several other Modular Buildings.

This is a description taken from LEGO.com. Please do not modify it. (visit this item's product page) Keep the wheels of commerce turning with the authentic Town Hall!

Build the authentic 3-story Town Hall, the latest addition to the LEGO® Modular Buildings series! This highly detailed model features large entranceway columns, a coat of arms, a tall bell tower with clock and a large skylight that lets you see inside! On the ground floor, the large hall, tax office and auditorium have everything you need to run the town. Take the working elevator up to the secretary and mayor’s offices on the second floor, realistically furnished with desks, chairs, paintings and even a frog sculpture. Hold a meeting and address the town’s citizens at the podium! On the third floor, a spacious meeting room features a large conference table, chairs, globe and plants. Includes 8 minifigures: mayor, secretary, bride and groom, press woman, janitor and 2 children.

14555 Creator: Harry Potter and the Chamber of Secrets