Cookies help us deliver our services. By using our services, you agree to our use of cookies. More information
Navigation
Actions
Reviews
Fan space
ShoutWiki messages
Wiki tools
From Brickipedia, the LEGO Wiki
(Redirected from Big Figure)

A big figure is a term for a figure larger than the average minifigure, generally represented by a few, non-poseable moulds, differentiating it from a brick-built figure.

In 1999, the first big fig, an almost nonposeable Rock Monster was produced. In 2008, the first modern big fig was introduced, the Giant Troll. There were two different kinds, a green Giant Troll with silver armor and a tan Giant Troll with bronze armor. In 2009, two other Giant Trolls were introduced with the same skin tones but with black armor. Tremorox and Geolix from Power Miners were also introduced that year, bearing similarities to the original Rock Monster, but with both arms moveable. In 2010, a Wampa from Star Wars and Eruptorr from Power Miners were both introduced. No more Big Figs were then introduced until 2012, with the Cave Troll and The Hulk, and they have steadily been included in sets since then.

Though big figs have appeared in video games as early as LEGO Rock Raiders in 1999 with recoloured models of the Rock Monster figure resurfacing in other early titles, LEGO Marvel Super Heroes has recently introduced mechanics where larger characters such as Hulk, Juggernaut, and Colossus are playable. This feature is also included in LEGO Batman 3: Beyond Gotham with the likes of Darkseid and Gorilla Grodd being made into big figures. 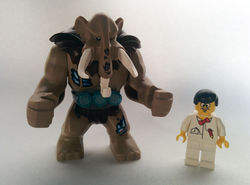 A size comparison of Mungus, a big figure, next to Dr. Cyber, a standard minifigure

Most modern big figs, although being designed different, have a similar structure with exceptions. They usually contain one part displaying a head, chest and legs. Connected to the arms are two arm parts which can rotate. There are also hand parts connected to the arms, which can also rotate.

Listed in order of introduction:

Though Big figures have appeared since LEGO Rock Raiders, they have recently become playable in LEGO Marvel Super Heroes and have continued to appear in subsequent titles by TT Games. 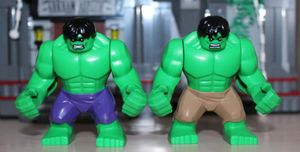