Batgirl, or Barbara Gordon, is a superhero and ally of Batman and Robin in LEGO Batman: The Videogame and reappears in LEGO Batman 2: DC Super Heroes in June 2012. She was released physically for the first time in 50003 Batman as a microfigure in 2013, and was later featured as a minifigure in 2014. Batgirl/Barbara Gordon is voiced by Rosario Dawson in The LEGO Batman Movie.

Batgirl has a new cowl mould that combines the cowl and her flowing red hair. She has two expressions, happy and angry. Her torso, arms, hips and legs are all black, while her hands are pearl gold. Her torso is printed with her bat symbol, utility belt, and purple lines depicting the plates of her armour. Her utility belt and suit design continues onto her back. She is printed with feminine curves. She comes with a bright purple version of Batman's cape and a Batarang.

She would have been yellow, with her white-eyed cowl being printed on her head. The bottom half of her face is also printed on in light nougat, with red lips and white teeth in a smug expression. The torso is printed with her black costume, muscles, feminine curves and a yellow bat symbol across her chest. Her legs at the top are black and have a yellow belt with a bat symbol in the middle. Her feet are unprinted, leaving them yellow.

Batgirl makes her first appearance as a LEGO figure in LEGO Batman: The Videogame where her default appearance is based on Batman: The Animated Series, featuring a colourscheme of blue, yellow, and and cartoony eyes in the style of the show. It should be noted, however, that that show depicted Batgirl with blue gloves and cape, not the yellow in the game.

Batgirl only appears in one variant, but is able to switch into four super suits:

All versions, including Batgirl's default costume, can also throw batarangs at targets and use grappling hooks. Batgirl's civilian identity is also playable on portable versions of the game. See Barbara Gordon for more.

Batgirl returns for both LEGO Batman 2 and 3. In these games, she can no longer use super suits, but retains the batarang and grapple abilities; portable versions of LEGO Batman 2 also allow her to hack computer terminals and perform acrobatics. Both of these games feature character models based on Batgirl's costume in The New 52. LEGO Batman 2, being released two years before Batgirl's debut as a real minifigure, features some differences from the official figure, notably a moulded chinstrap, a brighter cape, blue highlights, printed boots, and yellow as a secondary colour instead of gold. LEGO Batman 3 updates Batgirl to match her set appearance in 76013 Batman: The Joker Steam Roller. A variant based on Batgirl's costume in the sixties Batman TV series is also playable.

Barbara Gordon is the daughter of Jim Gordon, the Gotham City police commissioner. Barbara is dedicated to following in her father's footsteps, but is forbidden from joining the police force. Inspired by Batman, Barbara adopts the alternate identity of Batgirl. Batman initially discourages Batgirl, both for using his motif and for her inexperience, but through working with Robin, Batgirl comes into her own and is eventually accepted by Batman. Her father, however, is left out of the secret, causing both Batgirl and Batman stress as they imagine the consequences of what might happen to Gordon's reputation and their relationships with him if Barbara's life as a vigilante was to be revealed.

Barbara, taking on the identity of Oracle after an attack by The Joker leaves her without the use of her legs (which she has since regained, along with the Batgirl mantle), is a charter member of the Birds of Prey. Batgirl/Oracle, Black Canary, and Huntress form the Birds' core. Other members have included Katana and Poison Ivy. Barbara and Dick Grayson have also retained a close bond even since the latter has moved from his career as Robin to Nightwing, sometimes attempting to begin a romantic relationship.

Barbara is a member of the GCPD. She succeeds her father as police commissioner and introduces an initiative for the police to team-up with Batman to ease the intense crime Gotham experiences. At some point Barbara becomes Batgirl. 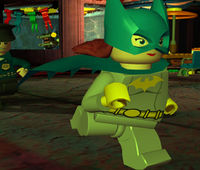 This is a description taken from LEGO.com. Please do not modify it. (visit this item's product page)

By day, Barbara Gordon, is the bookish daughter of the Gotham City Police Commissioner, Jim Gordon. By night, Barbara dons a cape and cowl as Batgirl, committed to justice like her father. While her a utility belt is equipped with Batarangs and other crime-fighting gadgets, her greatest tools are her brilliant mind and her unwavering determination.

Although she’s new to being a Super Hero, Batgirl is every bit Batman’s equal as a crime-fighter. They may disagree about the rules and methods, but Barbara Gordon’s experience as a police officer and her desire to protect Gotham City make her the perfect partner when things get tough and villains are on the rise. She might even have a few things to teach the Dark Knight about busting bad guys!

Bat-Fact: Has been known to take out the villains before Batman can even park the Batmobile.

When Commissioner Barbara Gordon™ decided to help out Batman™, this is NOT what she had in mind. Thanks to a blast from the Bat-Merch Gun, she’s found herself wearing a bright pink crime-fighting suit. How is Batgirl™ supposed to swing stealthily through the shadows and bust bad guys in this outrageous outfit? Looks like they’d better try that merch gun one more time!

Batgirl™ is a tech genius and an amazing detective. Even though she doesn’t have superpowers in the traditional sense, Batgirl is an amazing problem solver who never gives up. She always pushes the limits beyond what everyone expects of her.

The only thing faster than Batgirl's bad guy busting moves, is her quick thinking! She's Batman's partner at night and a police officer by day -- an unstoppable force of justice. All around she's a Super Hero with a lot of edge!