In LEGO Batman: The Videogame, Hush has a grey head covered in bandages, but with spots open for his mouth and white eyes. His torso is black with a muscular pattern. There are two red lines going up either side of his torso, and the one on his left side has a series of red dashes protruding through. This same line turns into a symbol of a red H in a matching circle before it reaches a horizontal but curving red line at the top which connects it to the opposite vertical one. There are three other curved grey lines under the curved red one that go down his upper chest. Hush wears a yellow belt that has the red H in a circle symbol. The belt has one red box with a yellow circle inside on Hush's right, and three on his left. His arms and legs are black and his hands are red and he has no back design.

Hush carries two pistols and uses a moveset similar to Two-Face, the differences being that when left idle without his guns drawn, Hush raises his hand to his mouth and makes a hushing expression, while Two-Face continuously flips his coin. Hush's only ability is that he can build LEGO objects faster than any other character when the "Fast Build" Red power brick is turned off or is not yet unlocked/purchased. 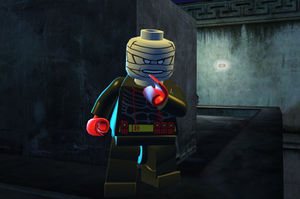 In the comics, Hush's alter ego is Thomas Elliot, a surgeon who used to be Bruce Wayne's best friend.

As a child, Tommy damaged the brake lines in his parents' car in an attempt to inherit their fortune. Tommy's plan failed when Bruce's father, also named Thomas, managed to save the Elliots. Tommy blamed Bruce Wayne for his "good fortune", a thought which, when he became an adult, would inspire a complex plan, which with help from The Riddler, was meant to destroy Bruce Wayne and his alter ego, Batman.

In LEGO Batman: The Videogame, like Ra's Al Ghul, Hush is a bonus character which plays no role in the game. He is unlocked after rescuing all the civilian hostages throughout the game on Consoles, PSP, and PC.

In the DS verion of the game, he is unlocked for purchase after being found in the villain hunt mode.

Hush returns in LEGO Batman 2: DC Super Heroes. He appears at the Gotham General Hospital, and is available to buy for 100,000 studs after being subdued.