"The Way of the Ninja" is the first pilot episode for Ninjago: Masters of Spinjitzu.

A solitary wanderer meets Kai, a young sword-maker, and his sister Nya in their small farming village right before a terrifying skeleton army arrives, ransacking their shop. The army takes a map hidden by their father years ago and Nya! The wanderer turns out to be Sensei Wu, an old friend of their father's. He promises to help Kai find his sister, but first Kai must become a ninja and master the art of spinjitzu. Kai begins his training and soon meets Sensei Wu's other ninja's, who realize they've all been recruited for very specific skill sets.

Kai, with his failed attempt at making a sword.

At the Four Weapons, a blacksmith shop run by Kai and Nya, Kai is attempting to forge a sword, however does so unsuccessfully because he tried to make the sword too quickly. An old man then enters the store, and criticizes Kai that his weapons are loud and heavy, suitable for samurai but not ninja. Kai tells him to either buy something or leave, and as Kai's back is turned, he disappears, much to Kai's surprise. Shortly after, a group of Skull Motorbikes, led by a Skull Truck with Samukai, Kruncha and Nuckal in it, attack Four Weapons, with Samukai ordering them to find a map.

Kai and Nya fighting off Skullkin.

Kai dons some of the store's armour and arms himself with a sword, telling Nya to stay in the store. Kai manages to defeat some Skullkin, as does Nya, who ignored Kai's instructions and sneaks up behind some Skullkin and knocks them down with a staff. With Kai and Nya distracted by other Skullkin, Kruncha and Nuckal enter the store, looking for the map, eventually finding it accidentally as they get into an argument. As Kruncha and Nuckal leave the store with the map, Kai engages Samukai, who uses four curved daggers as weapons. Samukai easily defeats Kai, but Kai is saved by as the old man returns and uses Spinjitzu. Samukai throws all four of his daggers at Wu, who manages to dodge them, but the daggers hit a leg of a tower outside the blacksmith's shop, bringing it down. It would have fallen on Kai, however, Wu uses Spinjitzu again to carry them both to safety. The Skullkin retreat, but not before the Skull Truck's bone fist is fired, taking Nya as a prisoner. Samakai gives this order, saying that he was told to do so by Lord Garmadon.

Kai sets off to get Nya back, but Sensei Wu tells Kai about the history of Ninjago. According to Wu, Ninjago was created by The First Spinjitzu Master, using the the four weapons of Spinjitzu- The Scythe of Quakes, the Nunchucks of Lightning, the Shurikens of Ice and the Sword of Fire. These weapons were meant be so powerful that no one can handle the power of all of the weapons at once. When the Master died, his two sons swore to protect the weapons, but the older brother was consumed by darkness and wanted to possess all of the weapons. The brothers fought, with the younger brother winning, banishing the older one to the underworld.

Peace returned to the land, with the younger brother hiding the four weapons, placing guardians to protect the weapons, and also making a map of the location of the weapons, giving it to an "honest man", so that in case the died, someone would still know the locations of the weapons. Wu tells Kai that the honest man was Kai's father, and that the older brother is Lord Garmadon, and that he needs to find the weapons before Garmadon. Kai correctly guesses that Wu is the younger brother, and asks Wu if he came for the map. Wu instead tells Kai that he came for Kai himself, to train him to become a Spinjitzu Master. Kai at first declines, but soon realises that he does not have the skill to get Nya back.

Kai being beaten by the training course.

Kai begins his training, first scaling a cliff face to get to the Spinjitzu Dojo. Inside the monastery, Sensei Wu reveals a training course, telling Kai that he must complete the training course by the time he finishes his tea. Wu then drinks his tea in a matter of seconds, and tells Kai that he failed for today, and must try again tomorrow. The next four days, Kai is shown to have failed the course each time in different ways, until the fifth day when he begins to make some progress.

Kai, after successfully completing the course.

On the sixth day, Kai quickly passes through the first few obstacles, with Sensei Wu hurrying to make his tea, however as he is about to drink it, Kai throws his sword while in mid-air, knocking the cup out of Wu's hand, making Wu start again. Kai continues with the course, but as he is pouring his tea, realises that Kai is sitting next to him. Kai asks Wu if he is now going to learn Spinjitzu, but Wu tells him that he already has, and his final test will come tomorrow.

Kai being surrounded by three ninja.

That night, three ninja in black robes infiltrate the dojo, and the episode ends with Kai being surrounded in his room by the three ninja while brushing his teeth. 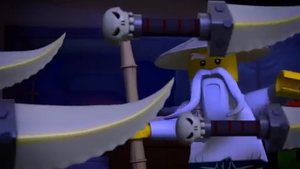 The Tournament of Elements